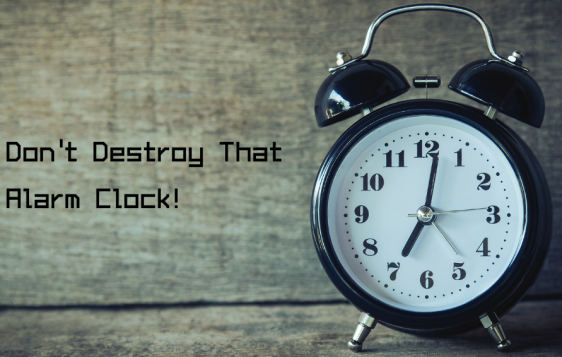 This morning I wanted to destroy my alarm clock.  Officially, 5 a.m. is my “rise and shine” time , but I just wasn’t feelin’ it today. So when the alarm went off (both of them, actually), I had to wage a war against my human nature from the first sound.  You see, the first thought that crossed my mind when my eyes opened was very simply: “I’m going to destroy that stupid thing!”  But then, I had to remind myself that it’s only doing its job.  There’s no choice involved on its part, but instead it is only doing what it’s designed to do: Wake me up.

This began to make me think about some other “alarms” in my life. Throughout my lifetime, God has placed all kinds of alarms in place for me. When I began to stray from His will and plan for my life at times, He always sent someone along to remind me of what His will and plan are.

Those alarms have come through friends, family members, parents, pastors, teachers, books, and with many other sources alarm. Sometimes their “sound” wasn’t too pleasant, but I heard it. At times it may not have been easy or enjoyable to hear what they had to say, but I listened. And when it’s all said and done, they were faithful to do what they were here to do, and the result was that I woke up.

I guess this is why people attempt to destroy the character of preachers so often: They don’t like the message, maybe it even offends them in some way, and so they set out to destroy the “alarm clock.”

Today, would you join me in taking a moment to remember that the alarm clock isn’t to blame for doing its job?  Had I not awakened, my day would have been ruined. And had God not sent all those “alarm clocks” into our lives, whether we enjoyed their message of alarm or not, chances are all our lives would look drastically different.

Don’t destroy the alarm clock for doing its job.  And don’t tear down the messengers for doing theirs.

Copyright © 2021 by Blake Martin @https://pastorblakeman.wordpress.com/2012/01/04/broken-alarms/ No part of this article may be reproduced or reprinted without permission in writing from Lifeword.org.