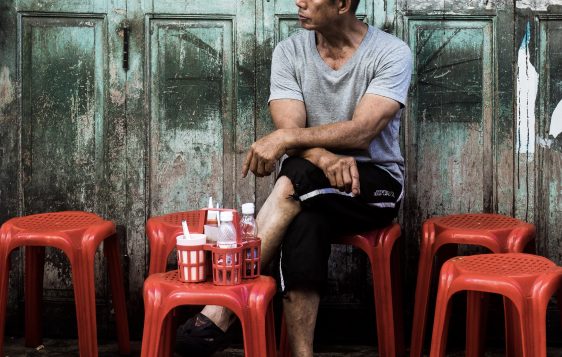 SOAR . . . Man, I love this youth conference. Sold Out And Radical.

Every summer, we gather up our youth group, pile onto a bus and drive eight hours to Dallas for an incredible three days. Of course that means no sleep, junior high antics and crazy bus games, but it’s the best! If you haven’t been to one, put it on your bucket list! It is just as much for the adults as it is the students.

It was 2013, just three years since surrendering everything to the Lord. I had completed six semesters with Faith Bible Institute and was on fire to learn more. I truly understood what it meant to hunger and thirst for righteousness.

I had been working with the youth group since the summer of 2010 and this was my third SOAR conference to attend. The theme that year was “Three Chairs: Sit in the Middle”. The picture showed three chairs, the one in the middle was bright red, the two on either side were light grey. The idea behind the image and theme was discipleship.

As we sat in the session, the evangelist spoke about how important discipleship was to the Christian life and furthering the gospel of Jesus Christ. He described it with the chairs:

“The chair in the middle is you. To your right is the one who is discipling you. They are pouring knowledge, wisdom and life into you through scripture.”

I looked to my right, and there was my dear friend Janee’ Brandon. (A little back story here, she pretty much took me under her wing the moment I entered the church doors. She allowed me the opportunity to work with the high school girls class on Wednesday nights and I was learning so much just by being in that class and watching her in everyday life.) So, of course, as I’m sitting there, I’m thinking, “Whoa. Yes! She’s really on my right!”

So, I look to my left with a huge smile on my face, and immediately my facial expression changed. Shock swept over me as the realization sunk in. That chair was empty. EMPTY!

Tears sprang to my eyes and began to flow. This conference was supposed to be for the students, not for God to speak to me! But there it was, clear as the nose on my face. I knew what needed to be done.

On the long bus ride home, I made a list (mostly because I love lists). I brainstormed people the Lord wanted me to disciple. A few people came to mind and I picked one. I thought, yes, I’ll make this happen. And I tried. But it felt so forced.

I knew the Lord wanted me to disciple someone, so shouldn’t this be easy? Shouldn’t it all fall into place? Times for us to meet never worked out. Phone conversations were always filled with static, interruptions, and little progress. I felt defeated. I was trying way too hard to make something happen. So, I took a step back and prayed. And waited. And waited some more.

Six months passed and still I prayed the Lord would reveal to me the one he wanted me to work with.

In January of 2014, a few of us took a group of young ladies from our church to a girls’ conference at our local camp. Some of the girls had attended our church for years, but we had a few newer ones and this was a great retreat for growing closer to one another and to the Lord.

Hannah Gunnels, a talented and knowledgeable young lady, was speaking to the girls out of the book of Ruth. Oh, what a beautiful story! As she laid out the storyline, she mentioned Naomi, Ruth and Boaz from the Old Testament. One of the girls sitting next to me, a sweet girl who had only been attending our church for a short time, said, “What is a Boaz? I’ve never heard of this stuff!” That’s when I knew.

As soon as the retreat was over and we were back home, I spent some time praying to make sure. I messaged them both and I said, “I noticed you girls mentioned you didn’t know some of the material we were talking about during the sessions. Would you be OK with me discipling you?” Immediately, they both responded with “YES!”

We met weekly. I wasn’t sure exactly how to do it, but the Lord led in such incredible ways. Every time they would learn something new, it was as if these little light bulbs would go off and their faces would light up!

“Ah-ha”moments. Nuggets, as we called them. Bits of information that fit so perfectly together revealing the majestic and beautiful story of Jesus Christ laid out through Scripture.

A few more girls were added and our group took on the new name “31.” Just us girls learning about who we are in Jesus and how to put what we learned into action. We would meet at my house every Thursday. I’d have dinner ready for them, we would eat and catch up on life and then dig in to the Word.

In Matthew 28:19, Jesus told us the formula for discipleship.  “Go ye therefore, and teach all nations, baptizing them in the name of the Father and of the Son, and of the Holy Ghost: Teaching them to observe all things whatsoever I have commanded you: And, lo, I am with you always, even unto the end of the world. Amen.” He was speaking to his own disciples.

They were men that Jesus gathered to himself, taught, and then encouraged them to teach others. Then those that were taught would teach another group and so on: “Be fruitful and multiply.”

My heart is never more on fire for the Lord than when I am working with a group in discipleship. And it was all because of