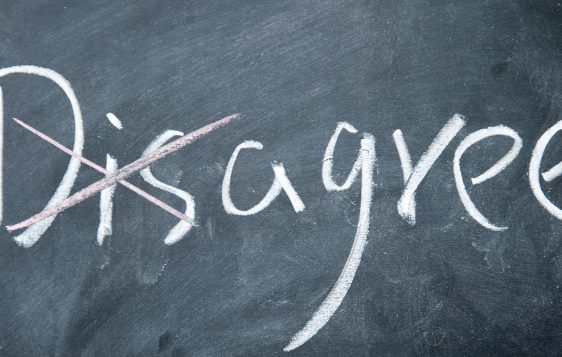 Disagreement usually sparks hatred. But when did disagreeing equate to hating? We, as a whole, have forgotten how to respectfully disagree.

Today’s culture reeks of hatred, wouldn’t you say? Not just in the political sphere—though that’s definitely a hot spot. Hate is also just in the air, in the cultural water, even in our personal relationships anytime we disagree.

It seems odd that disagreement usually sparks this hatred. But when did disagreeing mean hating? We, as a whole, have forgotten how to respectfully disagree.

But for Christians in a world like ours, disagreement is inevitable. Even in a world not like ours, centuries ago. I can’t think of anyone who people disagreed with more than Jesus. He had (and still has) haters, doubters, and mockers every day. People disagreed with Him incessantly. Especially the religious people! Yet, His haters could never persuade Him from the truth or make Him ineffective in His truth telling.

So how do we follow Jesus’ example and disagree in a way that’s not disagreeable?

Don’t act surprised when we disagree

Peter said, “Do not be surprised at the fiery trial when it comes upon you to test you, as though something strange were happening to you” (1 Peter 4:12). I scratched my head at Peter’s words–until I entered the public square with an opinion.

Now let’s all agree Peter’s context is historically dealing with “trials” more intense than mere disagreement. But, friends, let’s not be deer-in-the-headlights when sharp words follow that disagreement.

It’s not strange if, after standing up for truth, people call us “intolerant bigots.”

This is the world we are in. It’s just what happens in our day-to-day interactions.

… if tolerating you is the supreme virtue.

… if “I believe this, therefore this is right” is the religious anthem of the day.

… if “this feels right, therefore it is right” is the criteria for truth.

Isn’t it strange to be ridiculed for disagreeing with the progressive agenda? Isn’t it embarrassing to be accused as intolerant when tolerance is today’s societal goal?

But the popular ridicule that comes from standing on a timeless, biblical foundation doesn’t mean the better-received, trendier acceptance is right. Or even logical.

Tolerance involves disagreement by its very nature. You don’t have to grin and bear it—tolerate—through something you like. You can’t tolerate someone if you don’t first disagree with them. The very definition of tolerating someone means,“ Sure, I can get along with them, but I don’t necessarily agree.”

You’d think people who worship tolerance would enjoy disagreement. But it’s not that way. Why? Because the tolerance agenda is inconsistent.

In a land of true tolerance, everyone should disagree well with each other: We are all tolerating each other’s differences.

But when any of the culturally hot groups in our community demand tolerance, it’s typically one-sided.

If I disagree with a progressive view of the definition of marriage. I’m the bigot.

If I stand for the unborn woman’s voice,  I’m intolerant.

If I hold to traditional, scientifically assigned gender at birth, somehow I’m disagreeable.

Even though we both disagree, only I’m named the intolerant one. That’s inconsistent–and therefore illogical.

How’d we get here?

As we ask ourselves, “How has society come to this point of not being able to disagree respectfully?” we can’t deny the role of our phones. Our constant connection through our handheld world has slowly but surely trained us to believe that, yes, we are the center of the universe.

The social media algorithms and RSS feeds are designed so all the news and content bombs you receive on your phone are from sources you already agree with. Your opinions are only being confirmed.

Let’s not assume that, just because today is after yesterday, our culture’s ship is moving forward. What if we’re in reverse?

Because none of this is actually new. (Also see Ecclesiastes 1 that confirms there’s nothing new under the sun.) Christian, bear this in mind.

What isn’t human, really, is what’s happening. Person A critiques Person B’s belief. But Person B is never allowed to critique Person A’s beliefs. Essentially Person A, who thinks Person B should readjust life to meet outside critique, holds their own belief as immune from outside critique.

It’s childish. We should be free to disagree, especially when our disagreement with the world’s progression is founded on the Bible’s truths that never expire. Therefore, Christian, disagree. Trusting in the truth of Jesus, be bold and obey.

As normal–and important–as it is for us to disagree, we must do it well. How we disagree can be more harmful than the disagreement itself.

This is precisely why Peter says to defend your hope in Jesus “with gentleness and respect” (1 Peter 3:15). We, of all people, should extend dignity to all humans, for they all bear the image of our God.

For goodness’ sake, if you’re disagreeing on Facebook or in the comments section of YouTube, stop! It’s not helping!

The tension we pursue

Again, I come back to Jesus. Romans 5:8 details how He is the ultimate example of acting in love toward His enemy. “While we were still sinners” directly opposed to His righteousness, “Christ died for us.” And during Jesus’ life on Earth, He managed to disagree with sinners, yet they felt safe around Him. Because Jesus started with relationship. He started with care. He started with a posture of love for His beloved creation.

The Judge (and therefore Disagreer!) of all sin . . . attracted sinners! We need to ponder this. We must labor to, in the grace of Jesus, live out this tension. As we disagree, let’s do it boldly. But let’s do it in a way that leaves others wanting more.

Copyright © 2019 byJustin Talbert @ . Used with permission. No part of this article may be reproduced or reprinted without permission in writing from Lifeword.org.