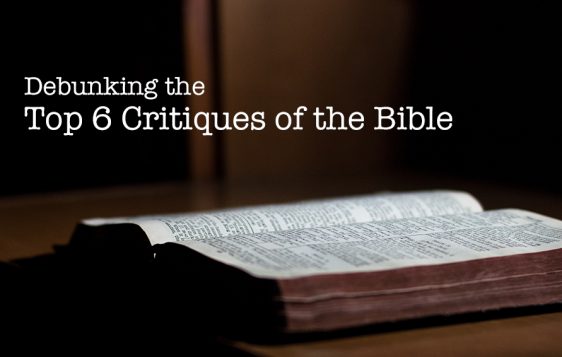 The Bible suffers no shortage of critiques. It has always had critics. Why, then, do people still cling to it as truth?

Why do people still surrender their lives for it and to it? Well, because the critiques aren’t as compelling as many believe.

Still to this day, these are the top 6 critiques of the Bible:

1) The Bible is full of contradictions

The classic response to this rarely fails: just pull out your Bible (app?) and say, “Would you please show me where?” Most people I’ve dialogued with throw out this critique of the Bible, less because they have personal experience with it, and more because it’s a popular myth.

However, there are many cases that different things are said in different places. But talk to anyone in music: This is called harmony.

For example, check out the death of Judas (you know, that bad guy who betrayed Jesus). While Matthew 27:5 explains, “And throwing down the pieces of silver into the temple, he departed, and he went and hanged himself . . . ” a passage like Acts 1:18 teaches, “Now [Judas] acquired a field with the reward of his wickedness, and falling headlong he burst open in the middle and all his bowels gushed out.”

A clear contradiction, right? Well, just research a layer deeper. Do some basic detective work. The historical spot of Judas’s death is at the bottom of a cliff, above which sits a tree. Now piece it together: Judas hanged himself from a tree . . . eventually his body rotted (or the rope withered) and his corpse tumbled on down.

As Dr. Gleason Archer wrote, “As I have dealt with one apparent discrepancy after another and have studied the alleged contradictions between the biblical record and the evidences of linguistics, archaeology, or science, my confidence in the trustworthiness of Scripture has been repeatedly verified and strengthened . . . There is good and sufficient answers in Scripture itself to refute every charge that has ever been leveled against it. But this is only to be expected from the kind of book the Bible asserts itself to be, the inscripturation of the infallible, inerrant Word of the Living God.”

2) The Bible contains errors of history

Again, this is another easy one for critics to throw out into the void: “Well…the Bible’s historically inaccurate, so . . . ” but like, what proof do they have? The historicity (shmancy word!) of Scripture is stunningly accurate – and fun to look into. Our boy Luke (yes, he wrote the Gospel of Luke and Acts) references thirty-two countries, nine islands, and fifty-four cities, all of which have been confirmed. A.N. Sherwin-White wrote, “For Acts the confirmation of historicity is overwhelming . . . Any attempt to reject its basic historicity must now appear absurd. Roman historians have long taken it for granted.”

Joseph Free writes, “In addition to illuminating the Bible, archaeology has confirmed countless passages which have been rejected by critics as unhistorical or contradictory to known facts.” Merrill Unger writes, “Old Testament archaeology has rediscovered whole nations, resurrected important peoples, and in a most astonishing manner filled in historical gaps, adding immeasurably to the knowledge of biblical backgrounds.”

When something in the Bible is historically questioned or refuted, just wait. Time will tell. The Bible, yet again, will prove itself.

The archeological dig will eventually occur, and this critique of the Bible will, yet again, be proven wrong.

Yes, both are true. Whoa, did I just concede this point? Well, yes. But no. Because it doesn’t affect the Bible’s reliability. I’ll explain. The science of biblical transmission is the process of copying Hebrew and Greek manuscripts over time to preserve them for future generations, all by hand. So like, when Paul wrote that actual letter in jail to the Philippians . . . how do we know it’s the same thing as “Philippians” in our English New Testaments? A ton of careful copying.

The copying was necessary

Scripture was first transcribed onto perishable materials. So preservation required constant copying and recopying until the printing press.

The copying was obsessively accurate

The Jewish scribes, dealing with the Word of God, were rigorous with their process. Bernard Ramm explains, “Jews preserved [the Bible] as no other manuscript has ever been preserved . . . They kept tabs on every letter, syllable, word, and paragraph. They had special classes of men within their culture whose sole duty was to preserve and transmit these documents with practically perfect fidelity.”

The copies are in abundance

We have a massive supply of manuscripts. There are now more than 5,686 known Greek manuscripts of the New Testament and over 25,000 manuscript copies of portions of the NT. Compare this to Homer’s Iliad, which has the second most number of manuscripts in history – a dinky 643 manuscripts.

So how transmission works is you take all the manuscripts you have and work backwards to formulate the originals (shmancy word is autographs).

The copies had mistakes

As those thousands of manuscripts are studied, it’s clear that mistakes occurred in places. There are misspelled words. And double words. Even added words. Sounds scary at first, right? Well, both Christians and non-Christian textual critics (those who work in the field of transmission) agree that even though mistakes are made, no teaching of any significance depends on any disputed texts; and no doctrine is affected at all. This is huge! It means our English Bibles are entirely reliable.

As Timothy Ward teaches, “The Holy Spirit did not work in precisely the same way through those who copied and transmitted subsequent manuscripts of the Bible. Mistakes did occur.” But these change nothing of the accuracy and therefore reliability of the Bible.

4) The Bible is monstrous, filled with adultery and murder

Okay, again, I agree that there is monstrous content within the Bible. But this critique of the Bible actually lends strength to Scripture.

The Word of God deals frankly with the sinful nature and character flaws of humanity. In other words, it doesn’t shy away from the truth. Why is there adultery and murder in the Bible? Because people committed adultery . . . and murder.

Importantly, this doesn’t mean these evils are supported. Just because Channel 7 News reports crime doesn’t mean it supports crime. So when you see the sins of the Israelites, or David’s adultery and murder, or the disorder in the early New Testament church, none of it is supported. But it’s there. ‘Cuz the Bible is real talk. Which I need.

5) The Bible is filled with all kinds of absurdities

Hah, I actually got this critique of the Bible recently. “The Bible is just weird.” I was like, yeah . . . you’re kinda right. Not only is it filled with wicked people doing wicked things (see #4), it’s filled with the supernatural. Like if you’re a Christian, do you realize you believe that an eternally invisible God became a baby via a virgin mother, only to die and then resurrect, for you? Not normal.

But listen to how Bishop Jewell (from the 1500s, y’all!) wrote about this. The “absurdities” have points to them. “Much is spoken of genealogies and pedigrees, of lepers, of sacrificing goats and oxen, etc . . . Those oxen and goats which were sacrificed teach thee to kill the Uncleanness and filthiness of thine heart: they teach thee that thou art guilty of death, when thy life must be redeemed by the death of some beast: they lead thee to believe in the forgiveness of sins by a more perfect sacrifice…Leprosy teacheth thee the uncleanness and leprosy of thy soul. These genealogies and pedigrees lead us to the birth of our Savior Christ, so that the whole Word of God is pure and holy. No word, no letter, no syllable, no point or prick thereof, but is written and preserved for thy sake.”

6) You Christians have different Bibles . . . which one is correct?

This is the classic question of canon– or “standard.” Which list of books belongs in the Bible? Even more specifically, this can be a question of “the Apocrypha” – a grouping of 15 books that the Roman Catholic Church includes but that the Protestant doesn’t. In other words, there is extra material Catholics consider inspired, and therefore on the same level as the rest of Scripture.

As a Protestant, I, of course, respect the Apocrypha – but I do not believe it is canon. Here are 3 reasons.

Although most of the Apocrypha’s content harmonizes with scriptural teachings, some doesn’t. There are, in fact, false teachings presented:

#2 Never quoted by the New Testament

Although the New Testament quotes the Old Testament over 300 times, the Apocryphal books are never quoted. This is worrisome. Out of 15 books, none of them are mentioned.

#3 Not endorsed by ancient Jewish writers and early church

This is crucial. The Old Testament was clearly defined and finished by the time the New Testament was being written. There was already a canon. So when the ancient fathers listed out all of the books included in the Old Testament, they didn’t include the Apocrypha. Interestingly, Jerome (who Catholics revere) did include it in his translation of the Hebrew Old Testament into Latin (also called the Vulgate). But he added a preface, stating the books weren’t biblical, just helpful.

How did the canon come to be?

This is a great question to consider. The natural thought is a bunch of old dudes gathered around a table and selected which should be included in the Bible and which shouldn’t. But this is far from the truth.

The Church never determined the canon, they discovered it. They didn’t regulate it, they recognized it. Therefore, the Church isn’t the master of the canon, but the servant of it.

God was intimately involved in the process. Essentially, within the sovereignty of God, Scripture established itself and was therefore universally accepted as God-breathed; whereas other helpful books (e.g., the Apocrypha) were just that, helpful. Kinda like“Christian Living”books written today. Or even this blog. They’re helpful. God uses them. But they’re not on the same level as Scripture – not even close.

Hopefully this list brought down some barriers within your heart that have kept you from trusting the Bible. I wrote it for a reason – I have personally struggled with many of these. If you are friends with someone wielding critiques of the Bible, pass this along. See if it helps.

Copyright © 2021 by Justin Talbert @ https://getgroundedministries.com/2019/09/20/how-to-counter-the-6-most-popular-critiques-of-the-bible/ No part of this article may be reproduced or reprinted without permission in writing from Lifeword.org.