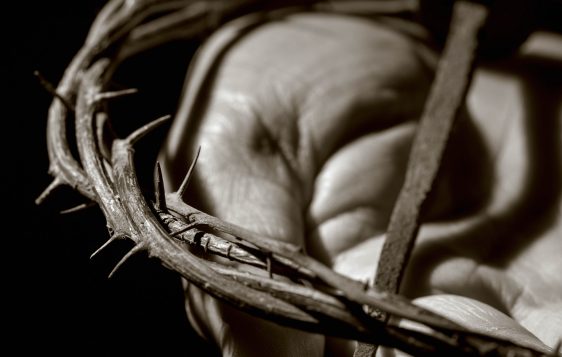 “Jesus died on a cross.”

We should not be able to utter that without an utterly overwhelming shudder of awe, compassion, and emotion. The people who witnessed it certainly did, and they were so moved that they spent the rest of their lives trying to convince people of Jesus’ deity.

Many of those witnesses were martyred, suffering gruesome deaths because they refused to be silenced.

Twenty centuries later, somehow the cross has lost its impact. Understanding exactly what Jesus went through on our behalf will move us toward a stronger love and commitment to the one who gave himself so that we may have life “to the full.” He was innocent and we are sinful. It was our sin that put him there.

It’s important to note that Jesus’ anguish didn’t necessarily start at his crucifixion, but rather in the garden the night of his arrest. Luke records that Jesus essentially had a panic attack that night, highlighting the fact that Jesus was in great distress even to the point of death, while also sweating drops of blood.

Sweating blood is the result of a medical condition called hematidrosis, where the subject undergoes stress at such an intense level that the blood vessels rupture into the sweat glands, causing a hemorrhage into the ducts of the sweat glands and subsequent extrusion out onto the skin.

The subject literally sweats blood. A significant number of cases related to this condition have been associated with a severe anxiety reaction triggered by fear. The exhaustion that ensues with this type of reaction occurred before Jesus was dragged around Jerusalem, flogged, and crucified.

The Stripes That Heal

Following the garden, Jesus was tried and then sentenced to a Roman flogging or “scourging” as the Bible calls it.

Scourging was the usual punishment prior to a crucifixion, the most brutal and inhumane punishment executed by Roman soldiers. The victim was usually tied to a column then whipped with an instrument that had three leather straps with metal, iron, or bone attached to the ends. Tenderizing the victim’s flesh during the beating, hooks that sunk into the skin were mean to rip the flesh off.

Severe blows to the chest and ribs during the scourging often caused the ribs to be ripped out, resulting in excruciating pain with every attempted breath. The victim would writhe and twist in agony, falling to his knees, only to be jerked back to his feet again and again until he could no longer stand. The victim was further stripped of his dignity as humiliating insults and scornful words were hurled at him.

“Bouts of vomiting, tremors, seizures, and fainting fits would occur at the varying intervals and sometimes appear during these maneuvers [the scourging]. There would be agonizing shrieks by the victim at the conclusion of each lash, usually begging and pleading for mercy. The scourging propelled Jesus into an early stage of shock. Over the next few hours there would be a slow accumulation of fluid developing around the lungs, adding to his breathing difficulties. There would also be lacerations of the liver and perhaps the spleen.”

After his beating, Jesus was mockingly given a purple cloak, a reed (a staff), and a crown of thorns. Soldiers filed past Jesus, kneeling before him, spitting on him, and taking away his staff, using it to strike his crown of thorns, nose, and face. The blows from the staff would have irritated the nerves so the pain was similar to an electric shock.

Again, Dr. Frederick relates, “Exacerbations and remissions of throbbing bolts of pain would have occurred all the way to Calvary and during the crucifixion, activated by the walking, falling, and twisting; from the pressure of the thorns against the cross; and from the many shoves and blows by the soldiers.”

At this time there would be significant build up in the lungs (pleural effusion), making Jesus progressively weaker, light-headed, ashen in color, short of breath, and unsteady on his feet. The increased blood loss is cycling him toward hypovolemic shock.

The “Parade” To The Grave

At high noon in hot, dry conditions, Jesus had to climb about a half mile to Golgotha on an unpaved and bumpy road. Lacerations, open wounds, blood loss, and ripped bones and muscles would have caused stumbling, falling then the effort to get back on his feet.

His cloak would have been virtually glued to his body by the clotted blood in the open wounds caused by the scourging, and it’s no doubt that it was yanked off, sending jolts of pain throughout his entire body.

All this, and yet still to face the most horrific of all: crucifixion.

At the place of his death, Jesus was forced to lie down while three Roman soldiers secured him to the crossbar of the cross. One soldier laid across his chest, holding him in place, while two others stretched out his arms to secure his hands to the cross bar. The five-inch, square nails were pounded through the palm of the hand, just below the bulge at the base of the thumb (not the wrist).

Two soldiers would have lifted him up and secured him to the horizontal piece of the cross that was already in the ground. His knees would have been bent until his feet were flush against the cross, then both of his feet were nailed to the upright separately.

Jesus would have been completely naked and the cross placed at eye level so that mockers could hurl insults and further humiliate him. As a deterrent to crime, the hill on which the cross was placed would have been visible to most people in the city.

“This Is My Body And Blood”

The panic attack in the garden, the scourging by the Roman soldiers, the nailing to the cross and the upright position he struggled to maintain caused numerous medical issues:

severe trauma to the nerves, muscles, and skin

inflammation of the heart sac

Jesus endured so much pain that his body finally gave out due to traumatic and hypovolemic shock. The hemorrhaging and pain overwhelmed his body to the point of death.

Jesus really did give his body away. By the time he died he was a mangled mass of flesh, unrecognizable even to his own mother. As a parent, could you imagine seeing the son you love go through this? He did this willingly. Can you image that?

All for the sake of doing God’s will, his Father’s will

No person on earth would have willingly endured these horrific pains unless his resolve was so absolutely fixed on God that nothing would stop him. His relationship with God was perfect.

He gave us his body.

He gave us His blood, literally pouring himself out for us.

Is there a cost for love? Yes. And Jesus paid the highest price in order to identify with us perfectly and to show that God not only loves us but is willing to be sacrificed on our behalf, so that we would ultimately belong to Him. He purchased his own with his blood, and what a remarkable payment it was.

If we say we follow Jesus then we ought not do anything less than give ourselves away for the sake of others. Jesus calls us to die to ourselves, or, in other words, to put ourselves last.

Let us give ourselves away for God’s will, and make sacrifices for His purposes.