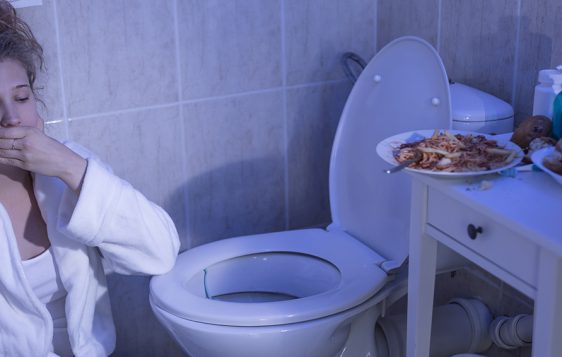 “It’s easy. All you have to do is stick your finger down your throat ‘til you gag and throw up.”

I’ll never forget those words. I was in junior high and a cheerleader friend of mine wanted to keep her weight under control. It had started with her grandmother, who helped her by packing a lunch every day that included raw vegetables and lunchmeat with no bread. Mandy was a stocky girl but not overweight, and her advice intrigued me.

She went on to give me other important tips on how to expel food, then I tried it not long after that conversation. Mandy was right. It was not that difficult. You see, I was the big tall girl who dwarfed her friends, all of whom were petite little things who caught the attention of boys. Most boys that age were not pushing six feet tall, so I didn’t get that attention . . . and boy did I ever want it.

I fully believed that if boys liked me, then I must be pretty, which meant popularity, which meant, well, I’m not sure why I desired “pretty” and “popular,” except that they directly affected my self-esteem, my self-worth. One thing seemed to be true, however: Skinny girls were pretty, popular and had boyfriends, all the things I thought were must-haves.

It wasn’t too long until there was a name for making yourself throw up: Bulimia. An ugly, horrible-sounding word that I acknowledged, but that was now a habit I used occasionally when I had over-eaten. I was bulimic, and I would continue to be for nearly three decades.

Even when I had those boyfriends I thought were necessary to feeling pretty, to having friends, and to being popular, I continued the nasty habit of expelling my food.

Even though I achieved my dream of being somewhat thin, getting attention from boys, and being part of the popular crowd, I still wasn’t happy with myself.

Worse yet, even though Jesus had saved my soul at a young age, changed me through the power of his Holy Spirit, and led me to a life of serving him, I continued this secret sin that no one knew about . . .

Except for the Savior of my soul.

I was married and had children before I allowed myself to admit that God knew and that he wanted it out of my life. For all those years of abusing my body, I was able to put that in a secret box, throw away the key, and shut God out when I bent over the toilet. But it was ruining my walk with the only One who could bring me out of that addiction. And make no mistake, it was an addiction.

But admitting my bulimia didn’t put a stop to it. God would do that through his Word:

Or do you not know that your body is a temple of the Holy Spirit within you, whom you have from God? You are not your own, for you were bought with a price. So glorify God in your body. (1 Corinthians 6:19-20)

Although I had memorized the verses as a child, God removed the blinders from my eyes during in-depth Bible study of them, and I knew I would have to unlock that secret box and pull out my addiction and all the other ways I was abusing God’s temple.

Paul wrote his first letter to the Corinthians to address problems in the church, and in chapter 6 he denounces sexual sin in the strongest possible terms. But Paul’s scolding includes all sins of the body, which is where all three members of the trinity dwell: God, Jesus and the Holy Spirit.

All that time I was making myself throw up, I was destroying the building, his temple, where my Creator, my Comforter, and my Savior dwell.

I remember where I was sitting with other women, my face flushing with shame that I had the audacity, pride and self-sufficiency to believe that God would ignore how I was abusing his temple. How was I able to justify it and forget that my Savior and Lord was waiting to destroy that sin and remove it from my life forever?

He whispered those three words to me, but I shouted right back at him,

“But, no, Lord! You don’t understand how horrible a person I am and how much I don’t deserve those three things. How I hid that sin from everyone, pretending it didn’t exist. If you knew that, you wouldn’t offer me peace and rest for my soul.”

“I know,” he said. “I remember the first time you made that choice, and I know all the other times, too.“

The painful journey to complete healing had just begun. I read those verses again, then the entire chapter, then many other Bible verses in the Bible on that topic, then commentaries, then journaling and thousands of prayers.

I let God speak to me about self-esteem and other “self “ issues, which I hadn’t allowed him to do before because of pride and many other stumbling blocks that I was now freely able to admit.

The journey to healing is ongoing; in fact, it continues to this day. Just like any other addiction, my mind still tells me, “Since you ate too much and might possibly gain weight, you should just throw up that food. No one will even know!”

Beloved one, the fact that he knows every little, medium-sized and extra large thing about you and your existence is freedom, not bondage. Don’t run from that. Don’t lock it up in a box. Talk to him about it, and be free of it!

Let God whisper to you those three attributes of who he is:

Copyright © 2020 Lifeword.org. All rights reserved. No part of this article may be reproduced or reprinted without permission in writing from Lifeword.org.