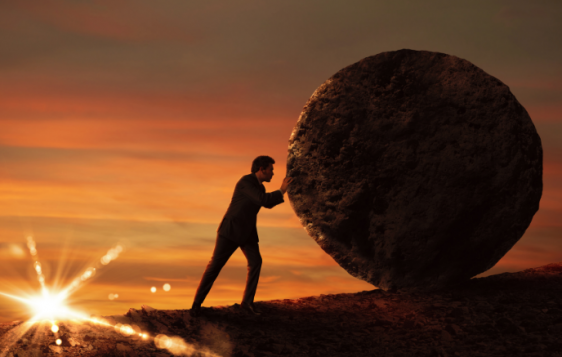 The natural world generally takes the path of least resistance. As streams trickle down a mountain, water flows where gravity pulls it, running around obstacles it encounters. A seedling pushes its way through soil and finds its way around rocks or concrete to find the best path toward the sun.

Humans are not much different. We consistently choose what’s comfortable rather than voluntarily walking into a struggle. This is true of circumstantial and relational struggles: In circumstances, we’ll do anything to avoid hard times and be comfortable. In relationships, rather than acknowledge uncomfortable emotions that indicate a need for change and engaging in the necessary struggle, we ignore the emotion and continue with the status quo until the difficulty infects our attitudes, relationships, and behaviors.

In Genesis 32 the Bible records one of the most intriguing accounts of struggle in Scripture. Prior to this passage, Jacob realized he’s no longer in good standing with his father-in-law Laban. As a result, God says to return to his family land, promising things would “go well with him.” Jacob is fearful, so he resorts to doing what he’s always done: manipulating circumstances to “make sure” things go according to God’s plan.

This very tactic had created distance and discord with his brother Esau, whom he encounters upon arrival. Jacob had swindled his brother out of both his birthright and his father’s blessing, so Esau’s anger is reasonable. Jacob’s plan involved sending ahead of him two companies of men, women, and children with gifts of slaves and livestock followed by his own wives and children then himself. In a further effort to appease his brother’s anger, each company had a message to Esau that these were all gifts for him.

This is where the story gets weird: After Jacob sends everyone and everything ahead, he’s left alone with nothing but an “angel of the Lord” who challenges him to a wrestling match. We don’t know why it started or its purpose, but we know they wrestled all night and neither one prevailed. This wouldn’t be significant except we later learn this is a manifestation of God, so we know this angel could have won the match.

Obviously, winning was not the reason the two struggled and Scripture doesn’t clearly explain, but it does shed light on some common purposes for struggles:

Let’s wrap this up and apply it to our friend Jacob in his wrestling match with God . . .

While Jacob knew God and his life was certainly blessed by God, much of it was marked by his “doing something”: manipulating his father for the birthright and blessing, working for Laban then for both of his wives, putting sticks in water troughs so his livestock increased, etc. But God wanted to show Jacob something new and deepen their relationship by letting him trust without activity to find that God was trustworthy. God’s character of faithfulness would be demonstrated in time, but during the wrestling match itself, God also demonstrated His mercy and power. His mercy in that Jacob wrestled with God and did not perish; and His power, in that when necessary, He injured Jacob’s hip to end the match.

God received glory from this circumstance in several ways:

Jacob and Esau reconciled, and in their peace and forgiveness God received glory.

Jacob’s limp from the wrestling match was an opportunity to speak of his encounter with God and testify of his worthiness.

Jacob’s trust in God instead of his own strength gave God all the glory as Jacob submitted to his authority.

This freed Jacob to simply follow instead of striving. What will your response be to God’s provision in your life?

Will you take the path of least resistance and trust Him?