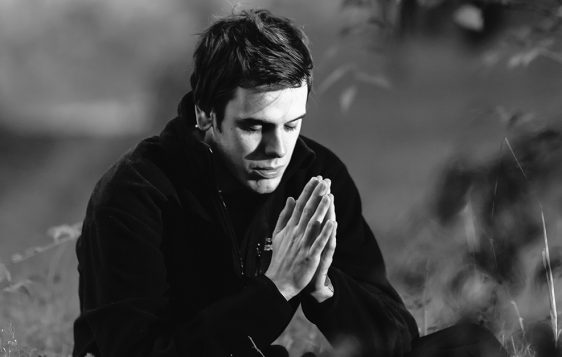 Have you ever wanted to improve at something without really knowing what improvement in that area actually looks like?

Have you ever wanted to do better, but found yourself overwhelmed with an abundance of instruction that never seems to really fit you personally?

Have you ever had an area of your life that was important to you, but you continually felt that you were not doing great at it?

Maybe those are not familiar feelings to you, but they certainly are to me.

Particularly in the area of prayer.

I STRUGGLE WITH PRAYER.

Over the last decade or so, I have listened to all the sermons, read all the commentaries, and studied all the books on prayer. Yet I never felt fully satisfied with my prayer life. I didn’t think that I was horrible at it, but I just never felt good about it. I definitely saw prayers answered, sometimes in downright miraculous ways. I had no doubt that God was listening to me. I was faithful and consistent to do it daily.

So, where’s the problem?

Over the last month, I have spent some time really thinking about my approach to prayer. I know it sounds weird, but I have been “praying about praying”. And I feel like some answers have been found. I feel that some areas of revelation have been given to me as to the state of my prayer life in ways that I had not recognized before. I feel like the acknowledgement of one major issue has already helped me.

I have finally honestly faced one of the biggest frustrations in my prayer life and received an unexpected revelation:

I have always marveled at people who say they can spend time with God without feeling the least bit distracted. I have listened to them and felt the sting of guilt and inferiority that I am not more like that. I try to be, but I’m not. The truth is that my mind wanders and I struggle to stay on topic while I am praying. Surely, those un-distracted people must be better Christians than I am. Surely, God must be disappointed in me.

Or so I thought.

EMBRACE, RATHER THAN FIGHT, THE DISTRACTIONS

During this time of “praying about praying”, I feel that God has revealed to me the bizarre need to EMBRACE, RATHER THAN FIGHT, THE DISTRACTIONS. I feel like he has shown me that when seemingly distractive thoughts come to my mind during prayer, maybe I should pause and discuss those thoughts with God for a moment. Maybe it is indeed just my mind wandering. But maybe it’s not. Maybe it’s a thought from God and maybe he wants it to be a point of prayer before Him.

And isn’t it worth finding out which one it is?

My first real encounter with this revelation was a couple of weeks ago during the time I had set aside for meeting with God in prayer. Right in the middle of what I was trying to focus on, a person popped into my mind for no known reason. In fact, I do not really know this person except by a Facebook connection through my daughter. I don’t even know how to pronounce her last name. Yet the thought was there. Surely this was just a wandering thought out of nowhere.

So, I apologized to God for the distraction and tried to continue my prayer. But then I felt an overpowering need to pause and pray for this lady and her family. I had no idea what I was supposed to be praying for or why, but I prayed anyway. Afterwards, I felt another powerful compulsion to let her know that I had prayed for her and her family. This whole episode was really bizarre and sending that message to her was extremely awkward. That was about 10:15 pm.

The following morning, I heard from this lady and found out that her daughter had been in an accident on the rural road leading to their home about an hour and a half later that night. The accident could have been much worse, but the daughter was completely unhurt.

I will leave it up to you to draw your own conclusions, but I have no doubt that God prompted me to pray for this lady and her family at this particular time. That random thought was not so random.

Since that episode, I have continued to EMBRACE, RATHER THAN FIGHT, THE DISTRACTIONS and bring them before God for discussion. That single concept has dramatically changed my prayer life in short order.

Rather than the repetitive, self- centered prayers that I had not realized were so common for me, I find that I am having bigger, bolder, and better conversations with God than ever before. I find that I suddenly feel more in tune with God’s agenda instead of just being focused on my own. I feel that I am hearing from God during my prayer times in new, fresh, and rewarding ways. My prayers times are now more exciting and go in unexpected and diverse directions:

DIRECTIONS THAT ARE MORE IN LINE WITH GOD’S DIRECTIONS!

Sure, I still get distracted. Certainly not every one of those encroaching thoughts is a message from God. But some of them are and I don’t want to risk missing a single one of those.

So rather than beating myself up with frustration about a lack of focus during prayer, I now bring those seemingly random and unfocused thoughts before the Lord. I let him help me sort out the meaningful versus the meaningless. Rather than me fighting a battle that I seemed helpless to win, God has turned it into an avenue of deeper and more fulfilling conversations between the two of us. Conversations that we never would have had before.

Perhaps, this is not a concept that will be of help to you.

But maybe you also struggle with a loss of focus and distraction during prayer. If so, intentionally laying those seemingly distracted and random thoughts before the Lord in those moments might be worth a try.

What if one of those thoughts is actually a thought that God has placed there for a reason and you ignore it?

Not a chance worth taking!