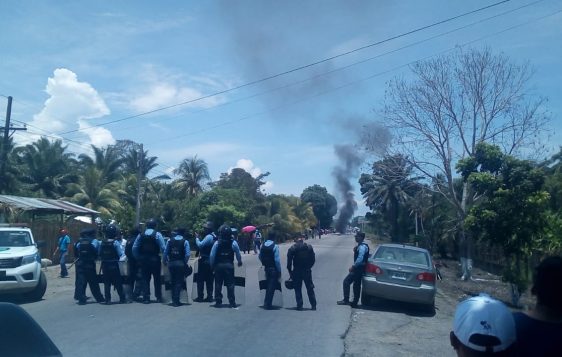 (Click here to read the UPDATE on this article)

In the darkness of the morning, Lifeword Garifuna partner Luis Gonzales sets out on his 24-hour journey from a remote village in Gracias a Dios (Thanks be to God) to Tela, Honduras. Led by Ricardo Herrera Ramirez, the Garifuna-language team are gathered to record programming in their native language.

Honduran politics are in turmoil, resulting in roadblocks, protests and even objects on fire in the streets by people demanding more health and education funding. Travel could be difficult for the BMMI team, so the trip is postponed and will be rescheduled at a later date.

“It was a big disappointment for the team to not be able to minister in Honduras with our missionary Denis Lopez,” said Ralph Izard, Baptist Medical Missions International (BMMI) Director of Operations. “But because of the volatile demonstrations going on it was felt we were putting the team’s safety in question if we went there.”

Our team members around the world experience challenging circumstances that we Americans sometimes do not even consider. And yet days of revolt and unrest in nations like Honduras are times when missionaries and preachers of the gospel depend on God.

“The laws of countries change; they come and go, but God’s law remains,” said Luis Gonzalez. “He never changes. He is always faithful and will be faithful.”

In America, we often take things for granted.

We don’t think about if we will have hot water, air conditioning or even water at all. We do not worry about revolts in the street blocking our way to work, even if floodwaters may be doing that for Arkansans right now.

We do not question whether or not our lives or jobs might be at stake for sharing the good news of Christ to a coworker or even inviting a friend to church. We have access to the Bible everywhere, we have churches on every street that are out in the open, and we do not face persecution.

We consider this a blessing.

But Lifeword team members in Honduras face challenges to get from point A to point B for the sake of Christ. They likely have a different perspective on what being blessed truly means.

“God allows his Son to shine over the good and bad and reign over the just and unjust,” says Luis Gonzalez. “But the greater blessings come to those who obey him.”

In his Sermon on the Mount, Jesus says in Matthew chapter 5 that the persecuted are blessed and the kingdom of heaven is theirs.

It makes me wonder if we, as Americans, are not as blessed as we think we are.

Please be in prayer for our team members in Honduras, the BMMI team, and for those in El Salvador who face earthquakes.

But also be in prayer for America. May we as Christians continue to proclaim the glory of God, no matter where we are or the circumstances we may face.

As his one day of travel stretched into two due to protests, road closings and the government shutdown, Luis Gonzalez said, “Patience is not the capacity of waiting but rather the ability to maintain a positive attitude as you wait.”