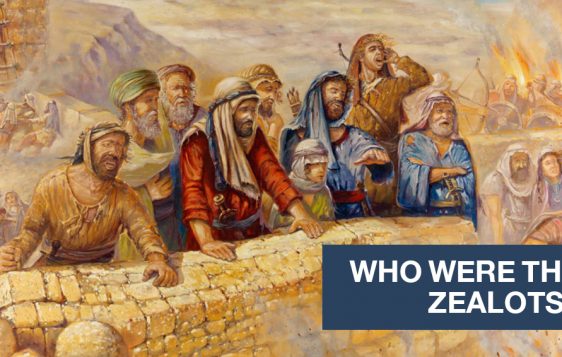 Let’s talk about the Zealots—the freedom fighters of ancient Judea.

Ever wondered about those religious groups the Bible mentions: Pharisees, Sadducees, Herodians, Zealots, Sicarii, and Essenes?  They formed between the Old and New Testament and five of them are mentioned in the Gospels and Acts . . . also, modern-day Christian, you can learn a lesson from each one!

In today’s English, we use the word zealot to describe someone who has fanatical and unwavering devotion to a cause. This all traces back to this  group of anti-Roman government Jews in the first century. The Zealots are indirectly mentioned in the New Testament four times—all referring to a disciple of Jesus: Simon the Zealot.

Though there were undoubtedly anti-Roman feelings before the Zealots came into existence, this group is thought to have been formed by Judas of Galilee in 6 AD in protest over Roman taxation of Judea. (Judas, a very popular name then – of Galilee is not Judas the disciple of Jesus.) The Zealots were similar to the Pharisees in most ways—theological positions, obedience to the oral law, and opposition to the Sadducees—except that they believed Jewish people should never be subject to another nation’s rule. For them, their Jewish faith was inseparable from an independent Jewish nation. To put it another way, they believed that only God had the right to rule over them.

Operating for over sixty-four years, the Zealots’ methods and actions understandably became more aggressive over time. For the first part of their existence, they were protesters that demonstrated against census-taking, taxation, the creeping of Greek culture into Jewish life, and the use of the Greek language in Judea. They wanted to conserve the Jewish way of life and rule themselves.

In 37 AD—a few years after Jesus’ death and resurrection—the Romans forced statues of Caesar to be placed in all Jewish synagogues in Alexandria, Egypt. As a result, extensive rioting broke out in that city in protest. In 40 AD, the riots in Alexandria began again when Jews were accused of worshipping a statue of Caesar. During the riots, the statue was destroyed. In response to these riots and having his statue destroyed by Jews in Alexandria, Caesar Caligula ordered that another statue of himself be in the Temple in Jerusalem. After a lot of convincing by Herod Agrippa, Caligula rescinded this order, keeping Jerusalem from rioting.

In 66 AD, tension between Rome and the Jews reached a boiling point as Roman worship was brazenly taking place in front of a synagogue in Jerusalem. Zealot demonstrators began removing Roman cult sites from Jerusalem. In response, the Roman governor of Judea stormed the Temple with troops and emptied the Temple’s treasury. This obviously caused mass riots to erupt. The governor then began executing many religious and city leaders by crucifixion despite them having Roman citizenship. This was the final straw—the Zealots then took up arms and quickly overran the Roman military garrison in Jerusalem, erased all Roman symbols from the city, and formed a new elected government of self rule.

Though it sounds like the bad Romans were expelled and now the Jewish people could live in self-determination, that’s not what happened. There was considerable in fighting in the city between the Zealots and the extremely radical Sicarii that became an all out civil war inside the fortified walls of Jerusalem. Outside the fortified walls of Jerusalem was a massive Roman army of sixty thousand ready to take back the city.

The Romans built a second wall around Jerusalem the same height as Jerusalem’s defensive walls for two reasons: (one) to prevent anyone from escaping once the siege of Jerusalem began and (two) to allow the Romans to capture anyone who was fleeing the civil way happening inside Jerusalem and then crucify them on top of their wall for all of Jerusalem to see that there was no escape. Five hundred Jewish (and Christian) crucifixions happened on this wall every day. It was horrific.

Eventually the city’s defensive walls fell and the Romans completely sacked Jerusalem and destroyed the Temple. First century historian Josephus records that 1.1 million were killed in the siege and all survivors—97,000—were taken as slaves. The triumph of the Romans over the Jews is commemorated with the Arch of Titus, which depicts the Temple being looted.

Though there were still small rebel groups until 73 AD in remote areas of Judea, the Zealot movement ended in 70 AD when they were all killed in battle.

Of course, we can learn a lesson from this religious group, particularly in the area of unity in Christ.

When Jesus picked his twelve closest disciples, among them was Simon the Zealot and Matthew the tax collector. Think about that—Jesus, on purpose, picked two men from each side of the political spectrum—one a pro-Roman tax collector and the other an anti-Roman, anti-tax demonstrator. Why?

The Jesus movement is bigger than politics. It’s bigger than tax plans, amendments, and ideology. There is nothing wrong with having an opinion on the minimum wage, immigration, and taxation, but those are all secondary issues to Jesus.

No non-sin issues should rise high enough in priority that it breaks the unity between Jesus followers.

I think Jesus changed both Simon the Zealot’s mind and Matthew the tax collector’s mind. I think He got them both to see that there is a higher calling to serve a higher cause for a higher kingdom. In Mark 12, we read that “the leaders sent some Pharisees and supporters of Herod to trap Jesus into saying something for which he could be arrested.” The leaders being the Sanhedrin controlled by the Sadducees, Pharisees, and Herodians—it’s all connected!

They asked this question: “Is it right to pay taxes to Caesar or not?” Jesus asked for a Roman coin and when they gave it to him, Jesus asked them whose picture was on the currency. “Caesar’s,” they replied. “Well, then,” Jesus said, “give to Caesar what belongs to Caesar, and give to God what belongs to God.”
Jesus is telling them not to tie their faith to their nationality. Yes, pay taxes. Yes, love your country. Yes, obey just laws. But God is superior to the state. God’s purposes are higher than government’s purposes. God’s kingdom is eternal, but all the kingdoms of earth—even the mighty Roman Empire—are temporary.

Lifeword has a huge catalogue of Christian programming that will keep you encouraged and strengthen your faith. Times are uncertain, so if you want to listen and watch content that is biblically sound, head over to Lifeword.org—they’ve got it for days!