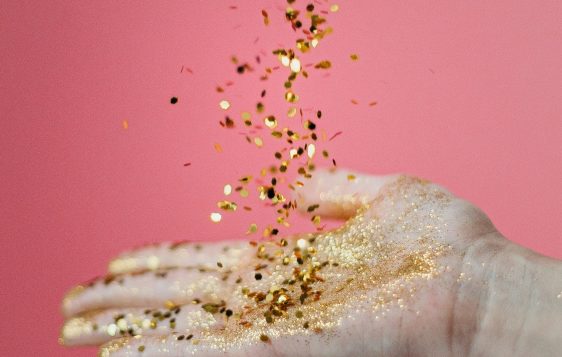 Last night, my girls in small group were asking what advent means and so we made our own advent calendar. As I was getting stuff set up, I knew we would be sitting on the floor and there was a ton of gold glitter everywhere, so I grabbed the vacuum and began to try to collect it all.

But the more I moved around, the more I saw little glimmers of glitter hiding in the carpet. There was no way I could get every piece. I couldn’t imagine how many specks of glitter were on that floor, not to mention how many are in a bottle of glitter!

Way out here on the farm, we are away from the lights of the city. On a clear night, every star in the sky is visible. It’s overwhelming to think how many there are. Just like the glitter was, if you tried to count the stars, you’d never reach the end and I’m sure you’d miss a few too!

“Now the word of the Lord came to him: ‘This one will not be your heir; instead, one who comes from your own body will be your heir.’  He took him outside and said, ‘Look at the sky and count the stars, if you are able to count them.’ Then he said to him, ‘Your offspring will be that numerous.’” (Genesis 15:4-5)

God told an old. childless man that his descendants would be too many to number like the stars in the sky.

But God created the world. God put the stars in the sky. If God could do that, He could do anything, even allow an elderly couple to have a baby.

Abram could have said, “no way!” He could have asked God, “how?” He even could have chuckled to himself at such an outrageous idea. He could have begun to worry. BUT, he didn’t. Instead, he did something really awesome.

“He believed in the Lord; and he counted it to him for righteousness.” (Genesis 15:6)

He believed. It was a seemingly simple act, yet it took courage, faith and trust.

God has given every one of us a promise – an eternal life in Heaven.

A life free from sin, death, and hurting.

A life spent with Him.

God has promised to free you from sins that destroy your life and your mind.

But the proper response is one thing. One word that Abram’s life showed.

God’s love for you is never ending. Just like the glitter, just like the stars. Innumerable and vast, you’ll never find the last bit. It goes on and on and on.

Don’t you want that? Do you need that?

Believe Jesus has the power to save you and He will.

Believe God has the power over your enemies, you must only be still and trust in Him.

Believe He is the creator and Lord of all.

Believe Jesus’s death on the cross paid the penalty for every sin and repent from the sins that fill your life.