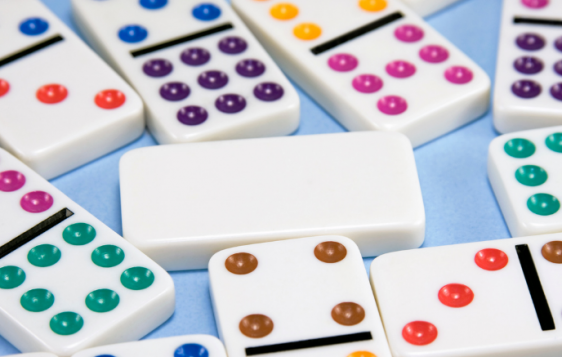 My family loves to play Chicken Food, a domino game you play with double 12s or double 9s. The holes on the dominoes are color-coded, so it’s really just about matching the colors and following a few simple rules.

All that to say . . . as a rite of passage, last Sunday we broke my six-year-old great nephew into the family circle of Chicken Foot. All was going perfectly well until he ended up with a large number of dominoes at the end of a hand – the opposite way to win at this game! – and promptly got up and pouted his way from the kitchen table to the timeout room for pouters and bad attitudes .

The adults continued playing until the final round, and the winner was  announced. Eventually, my great nephew made his way back to the family, but the game was over. Later I had to run an errand, and he decided to go with me. On the way back he said, “I wish we could play Chicken Foot again, but I know Granny and Nana probably won’t want to.” I immediately found that teachable moment . . .

“Honey,” I said, “You know what God’s Word says?” “What?” he asked. “It says we have not because we ask not. How do you know if Granny and Nana will play with us unless you ask them? All they can do is say, ‘no,’ but they might say, ‘yes.’ If they say, ‘no,’ at least you asked. That’s what God wants us to learn to do as His children, so ask.”

Well, he processed that as much as a six-year-old can. (Yes, I’m taking some liberty with the principle of  “you have no, because you ask not!” )

Back at Granny’s I had to laugh as I watched him work himself up to asking Granny and Nana to play Chicken Foot  again. Only I knew what was going on. Eventually he asked ,and to his surprise, and mine too (Oh, me of little faith), they agreed to play a couple of rounds.

When we were done I asked him, “What did you learn today?” He replied, “You have not because you ask not. And if they say yes . . . good, but if they don’t that is OK too, because I asked.”

Have you avoided asking Him because you have done something that makes you believe He won’t be interested in answering you?

Have you pre-determined God’s answer? Decided for Him that he will answer in a particular way?

Do you secretly believe he won’t answer or can’t  answer ?. Stop  believing those lies!!

Matthew 19:26- But Jesus looked at them and said, “With man this is impossible, but with God all things are possible.”

But what if he doesn’t do the impossible? What if He says no to what you want?

We must remember that He is a good God with a good plan and a purpose for everything. He wants the best for each of us and is looking at it from an eternal perspective . . . not a temporal one.

No matter how hard that is for us. No matter how we feel about it, God is a good Father and will do what is in your ultimate best interest; even though as His children we do not understand that many times. Just like our children don’t understand our decision making as parents.

When we know the truth of God’s Word, His promises, and His love for us, we can always trust that He acts according to His will for our good and His glory no matter how we feel.

If you’re wresting with approaching God, asking his forgiveness, asking him to take control of your life because you’ve made a mess of it, don’t even hesitate. Ask Him to take over, fill you with his presence, and show you exactly what grace is. Sure, none of us deserves it, but God sent His Son to the cross so we would surrender everything to Jesus. Seek Him today!

Copyright © 2021 by Vickie Arruda @https://purejoyinternational.blogspot.com/2019/03/chicken-foot.html/ No part of this article may be reproduced or reprinted without permission in writing from Lifeword.org.