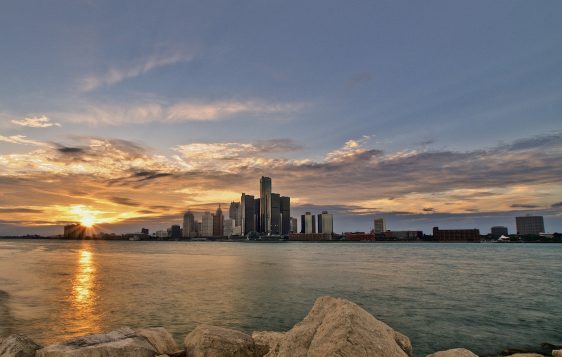 Detroit was once a bustling and influential city.

In the 1950’s 1.8 million people lived there, the car industry was booming, and Detroit was rolling in the dough.

But things began to change, and over time, Detroit has become one of the biggest crime cities in America. With the population now only a little more than 700,000, people have deserted this city by the droves.

When you look at pictures of Detroit’s Golden Era, you see beauty, wealth and American dreams becoming a reality. But when you see pictures of it today, it’s heartbreaking. I can only imagine what Henry Ford would feel today if he looked upon his beloved city and industry.

Maybe it was how God felt when he saw the depravity of mankind in the days of Noah.

“Now the earth was corrupt in God’s sight and was full of violence. God saw how corrupt the earth had become, for all the people on earth had corrupted their ways. So God said to Noah, ‘I am going to put an end to all people, for the earth is filled with violence because of them. I am surely going to destroy both them and the earth.’” (Genesis 6:11-13)

Creation was once beautiful, and now, thanks to the corruption of mankind, it would be destroyed on account of their violence and evil ways.

God, after being patient and allowing them time to repent, looked upon humanity and was heartbroken.

I can only imagine how heartbroken God must be at the state our world is today.

I’m so thankful for a patient God, but there is coming a day when Jesus will return, and the earth will be destroyed and the people who are unrepentant will face punishment for their sins like in the days of Noah.

Are you ready for Jesus to come back?