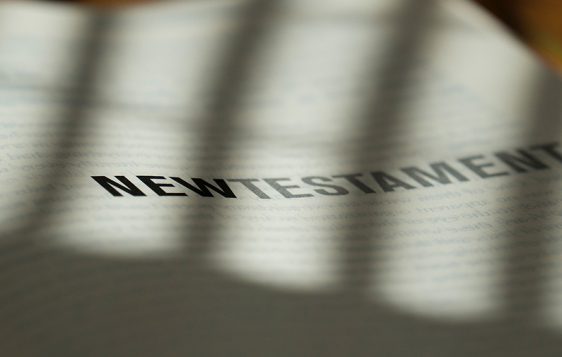 Have you ever wondered how the books of the New Testament were arranged—and how you can learn to find them faster?

The Old Testament has 39 books and encompasses approximately 75% of the Bible. The New Testament is much shorter—just 27 books making up about 25% of the Bible’s contents. However, just because it is shorter, that doesn’t mean some of the books are hard to find—books like Philemon, Titus, and Jude can be more difficult to locate.

Never fear, I want to explain how the New Testament is laid out and how understanding its layout can help you find passages faster.

The first four books of the New Testament are the Gospels—Matthew, Mark, Luke, and John. These four books chronicle the life of Jesus from four different angles.

The next book—yes, book (just one)—is Acts. It stands by itself as the history of the early church. The other twenty-two books can be lumped together under one classification . . .

Letters (or if you like the church-y word, epistles, which literally means “letter”). It’s not very helpful to learning how to navigate the New Testament if I just say the last twenty-two books are letters, so let’s break this broad category into smaller groups.

The biggest division you can make is between the letters Paul wrote versus the letters he didn’t write. Now if we take Paul’s letters, we can divide them into two groups:

#2 – letters written to specific people (1 and 2 Timothy, Titus, and Philemon).

These two groups, oddly enough, are arranged in order of length—longest to shortest. Remember, like the chapter and verses numbers, the arrangement of the books of the Bible are not inspired by God—it’s just the way we printed them as we put all the documents together in one volume. That’s why Galatians is before Ephesians even though Ephesians is 192 Greek words longer.

These letters were written to the community of Jesus followers as a whole—that’s why most of them (with the exception of Hebrews and Revelation) carry the author’s name as their title and not the recipient’s name. You might be wondering, “So John wrote the Gospel According to John, 1 John, 2 John, 3 John, and Revelation—why are they not all together?” Good question.

The Gospel According to John is put with the Gospels because it’s a Gospel—that one is a no-brainer. The real question is why Jude comes in and breaks up 1, 2, and 3 John from Revelation. This is more a flow thing with the New Testament. If you put Revelation after 1, 2, and 3 John, you would hear the incredible reality of the end of history and the glorious eternity we will have with Christ—then you’d pop back to Jude. It would be weird to end like that—so Revelation is put at the end to wrap up the Bible nicely.

So the library of books that is the New Testament is ordered like this: Gospels, Acts, Letters.

With the exception of Hebrews and Revelation, all the books that have names as titles are in the back half and are much shorter.

Just like anything, the more time you spend in the New Testament, the faster you can navigate it—and, there’s no shame in using the Table of Contents. It’s there for a reason!

Copyright © 2021 by Stephen Castleberry @https://www.youtube.com/c/stephencastleberry. No part of this article may be reproduced or reprinted without permission in writing from Lifeword.org.