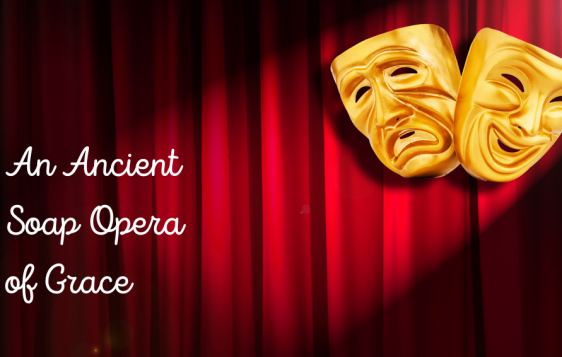 I read a story the other day about this girl. She left everything familiar and comfortable to follow her husband as he followed God. Then after all that following, she actually encouraged  . . . maybe even forced  . . . her husband to have sex with another woman because she couldn’t get pregnant.

And the guy, he’s no better. This guy actually gave his wife away to another man, because he feared the other man would kill him to get to her. Talk about spineless. And what’s worse, he did it not once, but twice!

If you read the same story, you might think it was on Entertainment Tonight (remember that Hollywood show?) or TMZ (Is that one still around?). But no! The story unfolds within the pages of God’s Word.

The guy is Abram. Who becomes Abraham – the father of Israel – God’s chosen nation.

The girl is Sarai. Who becomes Sarah – the mother of Israel – and a woman the Bible later refers to as holy and an example for all wives to follow (1 Peter 3).

Does this shock anyone else? I mean, really, these people are a hot mess! He’s a habitual liar who drags his family into no-man’s land then flakes on his wife the second things get sticky. And she’s so crazy she thinks up a plan to get her husband in bed with another woman and calls it a good idea!

What is going on? And why, oh why, did God choose these people?

I’m having this conversation with God and shaking my head in bewilderment. I roll it over and over in my mind and can’t come up with anything. Why God? Why them? They just seem so . . . undeserving.

And as that word trickled over the edge of my heart, His Word came crashing through the dam I never knew I had built.

For all have sinned and fall short of the glory of God.” Romans 3:23

Then the story changed. This story no longer told of two people tangled up in trouble. It told of two sinners. And one God. And grace.

And when I looked closer, it looked different. When I bent down and peered into the water, I saw my own reflection.

Fear and impatience drove Sarai to take matters into her own hands.

. . . so she said to Abram, ‘The Lord has kept me from having children. Go, sleep with my slave; perhaps I can build a family through her.’” Genesis 16:2

‘Look up at the sky and count the stars—if indeed you can count them.’ Then he said to him, ‘So shall your off spring be.’” Genesis 15:5

But God didn’t deliver on Sarai’s schedule. She grew tired of waiting, so she moved. She manipulated. And she made something happen.

That hits so close to home it hurts.

As God opened my eyes to just how much like Sarai I am, my judgment of her turned to joy as I realized my fate. God didn’t leave Sarai in the middle of the mess she made all by herself. He patiently waited until she came to the end of herself, and He delivered.

Now the Lord was gracious to Sarah as he had said, and the Lord did for Sarah what he had promised. Sarah became pregnant and bore a son to Abraham in his old age, at the very time God had promised him.” Genesis 21:1-2

Grace is what brings us to Christ, straight to his loving arms that are drawing us to salvation and a life of more abundance than we can imagine. Choose Jesus today.

And, Christian, grace is what Jesus extends to you daily, an undeserving sinner.

Copyright © 2021 by Katy McCown @https://katymccown.com/why-did-god-choose-them No part of this article may be reproduced or reprinted without permission in writing from Lifeword.org.