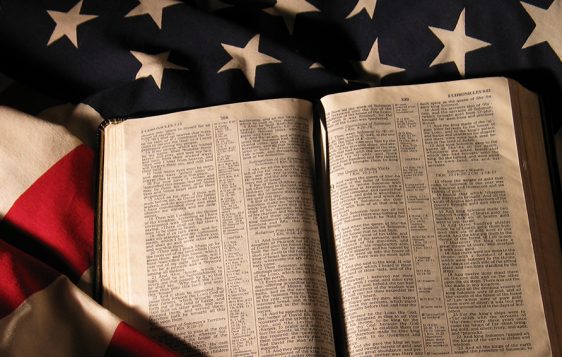 One of my favorite songs outside the category of worship music is “God Bless the U.S.A.” by Lee Greenwood. Just before Independence Day this year, Greenwood released a new edition of the song featuring Home Free, the Singing Sergeants, and the United States Air Force Band. It was a powerful rendition, and as the song always does, it got me feeling very patriotic about my country.

I am proud to be an American. I always have been. My dad especially instilled in me that the United States is the greatest country in the world, and that has been a huge influence on my life. I believe that when it comes to personal freedoms, the will of the people, the ability to freely practice religion, and the freedom of speech, our country prevails over most of the rest of the world.

This year, America has taken some hits. From the coronavirus to police brutality; riots and violence to political upheaval, 2020 has not been a banner year for our nation. The idea of one nation under God has been rejected in recent years, and 2020 has sparked a fire enflaming Americans on both sides.

One major problem is that no one seems to be able to have a civil conversation anymore. Lines have been drawn in the sand, and political affiliation has become the deciding factor in how we treat one another.

I still love my country. I’m still proud to be an American. But as I grow older, I realize more and more that being American is not what defines me.

There’s nothing wrong with patriotism, don’t get me wrong. I think that it’s good to be supportive of your country, your political leaders, your President. That’s important.

But it can’t come at the expense of our first loyalty, our Savior.

What I am seeing more and more these days is that the evangelical movement seems to be America first and Christianity second. We have redefined the word Christian to mean an affiliation with right-wing politics. That is dangerous. Dangerous to ourselves, and dangerous to the future of Christianity.

Over the last few months it has astonished me to see how many professed Christians have spoken loudly against the protestors and those supporting them. I’m not in favor of riots, but peaceful protesting has its place. And while I don’t support the Black Lives Matter organization for some of its beliefs, I do think those crying “black lives matter” have a valid point.

They need to be heard. There needs to be change. They need justice. They need us to cry alongside them.

Yet for some reason, many evangelicals seem to think that one cannot proclaim “black lives matter” without being “liberal” or “left-wing.” Meanwhile, they will cry out “blue lives matter” in support of police officers, asking for the same change and remaining blind to the fact that both statements might just be valid.

Police lives do matter. Many innocent police officers are being hurt because of the actions of a few bad officers. That is not fair, and they too deserve to be cried out for. But black lives also matter. There has been mistreatment and unfairness. This is not an either-or argument, and it baffles me that so many think it has to be. Both sides need justice. Both sides need support. Both sides need the love of Christ.

And isn’t that what Christianity should be about? Our first and foremost mission is to bring the gospel to the lost, yes, but shouldn’t we also speak out against injustice when we see it? Why is it that we are crying out in favor of one side, while shouting down those who try to do the same for another side?

This is not what Christ intended. He does not expect our national pride to exceed our call to love our neighbor as ourselves. He does not intend for us to hold on to our political party as tightly as we do our churches.

Jesus did not take sides in the upheaval between Rome and Israel. Why would he take sides today? If we want to reach our neighbor with the gospel, we have to be willing to lower our American flag, unhitch from whatever bandwagon we’re on, and be willing to listen.

I love my country. But I hope it can be said that I love my Lord more. This is a line that I fear many Christians are teetering on. Today on Facebook, I see more posts about politics than I ever do about the Bible.

I see more about Trump or Biden than I do about Christ.

I see more about the Second Amendment than I do the First Commandment.

I can only imagine the change we could make if those statements were reversed.

America is a great nation. But it is not my final home. Therefore, my patriotism can never be more for America than it can for heaven. I love my country, yes.

But I love my Lord more.