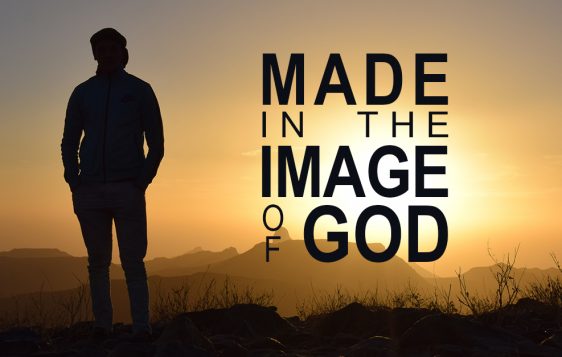 The Bible clearly states that God is the creator of all human life. (Find a list of some of those references at the end of this article.)

God is the creator of life. Therefore, life is a gift from Almighty God and we are to reverence it, respect it, and love it! This refers to our own life as well as the lives of other people.

God cares for flowers but nowhere does the Bible say that God loves a rose.

God cares for animals but nowhere does the Bible say that God loves a dog.

But God does love people who were made in his own image and after his likeness.

Because we were created for God’s glory, our lives have meaning for both time and eternity. We have an eternal purpose to live for. I believe that because life is a gift from Almighty God it should be reverenced.

Only into the human body did God himself breathe the breath of life. When he did, man became a living soul (Genesis 2:7; Job 34:14). Someone has said that the difference between man and animal is self-awareness and God-awareness.

“But no man can tame the tongue . . . It is a restless evil, full of deadly poison. With the tongue we praise our Lord and Father, and with it we curse men, who have been made in God’s likeness. Out of the same mouth come praise and cursing. My brothers, this should not be” (James 3:8-10).

James said that even though men had sinned, they were still considered valuable to God because they were made in His image. Paul said that the members of the Corinthian church who, as a whole, were a very carnal bunch of Christians (1 Corinthians 3:1-3) and made in the image of God. Paul told the Corinthians:

Even if sin has entered into our lives, we are not worthless.

“It is important to note that fallen man still retains something of the image of God. The fall separ­ates man from God, but it does not remove his original different­iation from other things (plants, animals, etc.). Fallen man is not less than man.”

God is the One who sanctifies life. As the creator of all life, he put value upon each individual being he created.

When he made us in his image, he sanctified human life and made it of utmost value and supreme worth, which is the basis of the dignity of all humans.

The important question is since you, me, all of us, reflect God’s image, how will that change how we feel about ourselves? Other Christians? Non-Christians? Unwanted babies?

How will that fact change my life?

How will it change yours?

Bible verses affirming that God created mankind in his image:

Genesis 1:27: “So God created man in his own image, in the image of God He created him; male a female He created them.”

Genesis 2:7: “And the Lord God formed man from the dust of the ground and breathed into his nostrils the breath of life, and man became a living being.”

Job 1:21: “Naked I came from my mother’s womb, and naked I will depart.  The Lord gave and the Lord has taken away; may the name of the Lord be praised.”

Job 31:15: “Did not he who made me in the womb make them? Did not the same one form us both within our mothers?”

Job 33:4: “The Spirit of God has made me; the breath of the Almighty gives me life.”

Deuteronomy 32:39: “See now that I myself am he!  There is no God besides me. I put to death and I bring to life, I have wounded and I will heal, and no one can deliver out of my hand.”

Isaiah 44:24: “This is what the Lord says—your Redeemer, who formed you in the womb; I am the Lord, who has made all things, who alone stretched out the heavens, who spread out the earth by myself.”

Isaiah 49:5: “And now the Lord says—He who formed me in the womb to be his servant to bring Jacob back to him and gather Israel to himself, for I am honored in the eyes of the Lord and my God has been my strength.”

Psalm 33:15: “He who forms the hearts of all, who considers everything they do.”

Proverbs 22:2: “Rich and poor have this in common: The Lord is the Maker of them all.”

Isaiah 17:7: “In that day men will look to their Maker and turn their eyes to the Holy One of Israel.”