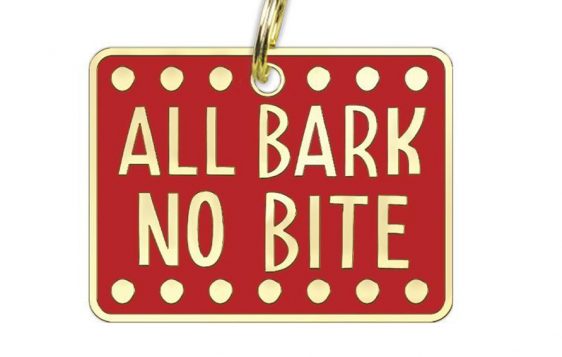 The United States is one of the only countries in the world where the church is in decline. There are plenty of theories available as to why this is happening, but I’ll throw one more out there anyway:

American churches fit the cliché “all bark and no bite.” So what exactly does that mean?

I actually think there are a great number of pastors who preach good doctrine. We have better biblical literacy in America than just about anywhere else in the world. Mass media has made the Christian message available to the whole nation. In the U.S., the gospel is not a secret to anyone who is curious about God. We have plenty of “bark”, but we lack “bite.”

What gives Christianity some teeth with which to bite? I’ll first tell you what our bite is not:

Our bite is not now nor has it ever been political power. Most people know what Christians are against. If we think by gaining enough political power we can somehow legislate our country into righteousness, we are mistaken. We do not wrestle with flesh and blood.

And as I mentioned before, I think that Christianity and the gospel, at least in America, are fairly familiar or, at worst, widely accessible to the general population. So what do we lack?

I believe we are lacking Christians who actually live as if they really believe Jesus is the only thing that satisfies.

It’s more like, “I surrender almost all, but let’s not get crazy” Christianity.

It’s “I’m going to give some of my time, talents and money to Jesus” Christianity.

And NOT “I’m going to bring back to God what he has given me” Christianity.

These attitudes manifest in many ways. I’ll mention two areas that I observe as having a huge impact, but this list is by no means exhaustive.

For many, giving financially to the church or missions only occurs at a comfortable level. This means that giving never exceeds a comfort zone. Sure, we’ll tithe, but that is because we’ve already budgeted that in. But real sacrificial giving is another story.

Surely God would never ask us to actually have faith that he will supply our needs when we give in such a way that dips beyond our budgeted plans or makes us give up the things we want? Did you know that if you make $34,000 per year, you are in the top 1% of the world in income?

With that fact in mind, you might read 1 Timothy 6:17-19 in a new light. You might also want to do a quick Google search on how many times God addresses how we should care for the poor.

I truly believe the real reason the church is losing cultural relevance in the areas of sexual purity and marriage is that we have unwittingly adopted the world’s idea that sex and romance are the ways a person gains ultimate satisfaction.

Of course this isn’t preached from the pulpit, but it’s definitely in our church culture. Single adults are often looked upon with pity. Why? If a person is totally in love with Jesus and is totally trusting God to be the provider of what they actually need, there is no reason to pity them. (This concept also applies to how we often pity missionaries or pastors who don’t make much money.)

Marriage and sex are good things, but Jesus is better. Let’s just be real. Most of us don’t really think a person can experience the fullness of life without a life partner. And because we believe that, we constantly tell singles “God has someone out there for you.” Or we tell the gay community “God will change your desires and then you might have a spouse someday.”

Unbelievers see us Christians trying to hang on to everything the world has to offer, only giving up as much as we feel necessary to be accepted in our church culture.

Unbelievers see our desire for the same pleasures and fulfillments as the world wants. Therefore, they could only conclude that Jesus is holding us back from what we really want but he makes us feel like good people.

And when the world sees that, the gospel becomes part of another religious system. All our barking about Jesus ceases to have any bite whatsoever.

Copyright © 2020 Lifeword.org by Klinton Silvey at Life in Progress Ministries. All rights reserved. No part of this article may be reproduced or reprinted without permission in writing from Lifeword.org