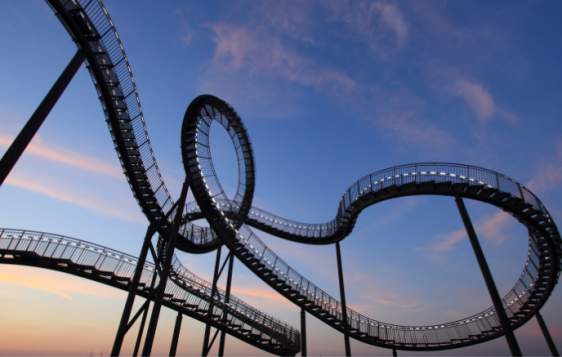 As a kid I always had a fear of roller coasters. They always looked too big, or too fast, and anything that went backwards or flipped me upside down was definitely going to somehow get me killed. Thankfully, it only took me working up the courage to hop on one to realize that my perception of those roller coasters was a projection of an irrational fear. The danger wasn’t even real, and yet I had allowed it to rob me of joy.

While I only really missed out on a handful of roller coasters, the fact that I had let the experiences I could have had with friends and family pass me by was the real loss. The thought began to roll around in my head for a bit, and I started to wonder just how much of our lives we allow to pass us by when we cede our lives unto our anxieties.

Like it or not, fear is an element of the human condition we all experience one way or another. Sometimes, it can linger in the back of our minds as a silent anxiety, trailing us like our own shadow. For many it manifests as near palpable dread, and we can’t see anything other than this fear we’ve constructed in our very own minds. At its worst, that sensation of fear can not only paralyze us into neglecting the opportunities we receive in life, but it can easily begin to stunt our spiritual growth as well.

Like I said, fear isn’t anything new to the human experience, and God has seen the full breadth of humanity’s personal struggle against fear since the fall of Eden. Even Jesus was confronted with his own fear on the eve of his arrest and crucifixion, but like with all things that come in our path, God provides an avenue to conquer. When it comes to struggling against fear, however, a biblical persona I always feel everyone can learn from is Peter.

In a lot of ways, Peter is the “everyman” of the apostles, becoming hindered by the same obstacles that act as roadblocks in our lives: anger, guilt, and certainly fear. In my opinion, his struggle with overcoming his fear is one of the defining characteristics of his journey, and you might already know of the most famous example of this in Peter’s story: when Peter walked on water.

It happened as Peter and the apostles were attempting to cross a lake and a storm had begun to lash at their vessel. Amidst the tempest they saw Jesus walking upon the water, and initially believed him to be a ghost. However, when they realized who he was it was Peter who called out to Jesus, saying “Jesus, if it’s you, tell me to come to you on the water” (Matthew 14:28). Jesus did just that, and Peter listened, taking steps across the roiling waters as if they were stone. But his eyes left Jesus as the storm churned around him, and his faith wavered as fear began to paralyze him. Peter sank. That should have been the end of Peter, but Jesus will not allow us to drown in our fear, and thus pulled him from the waters.

Peter failed that day because his fear dictated his actions, allowing it to deceive him into thinking that the storm was somehow beyond the control of the God that stayed his feet on the very ocean. In reality, his fear of the storm around him was more concrete than most that we struggle with, but it was just as small before God.