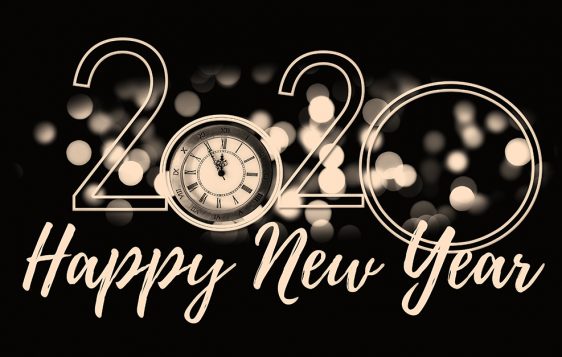 Was it a good year or a bad year?

If you had 2019 to live over again, would you do something differently?

Sometimes you give life your best shot and you still come up short.

Sometimes you study for the test and you still fail.

The fact is, you’re going to fail quite often in life. It’s not a matter of if you will fail – it’s when you will fail many, many times because nobody’s perfect and we all make mistakes.

As we begin this New Year I want us to look at how we can make fresh starts because God is far more interested in your future than he is in your past.

Some people think God wants to hold our pasts over our heads and use that to guilt us into doing his bidding. But this is wrong.

He says don’t think about the past.

The book’s closed on it.

Remember Paul’s words in Philippians 3:13-14, “Brethren, I do not regard myself as having laid hold of it yet; but one thing I do: forgetting what lies behind and reaching forward to what lies ahead, I press on toward the goal for the prize of the upward call of God in Christ Jesus.”

I want to give you a formula for starting over – START.  I hope you’ll remember this and pass it along to your friends and family.

To start over, I have to stop making excuses for my failures.

I’ve got to stop blaming people, using rationalizations, or seeing myself as the victim of my circumstances instead of owning up to my own mistakes.

Let me be clear on this: Other people can hurt you, without a doubt, but nobody can ruin your life except you.

You don’t know what’s going to happen in ’21, but you can choose how to respond. And we respond by being honest and accepting responsibility for our part in the problem.

Proverbs 28:13 says, “A man who refuses to admit his mistakes can never be successful.  But if he confesses and forsakes them he gets another chance.”

There are three most common reasons for failure, so maybe if we are aware of these three we might be more aware of why we are failing or have failed.

The Bible says we need to stop making excuses. admit when it’s our fault and get on with life. People who are very good at making excuses are rarely good at anything else.

I need to evaluate all of my experiences.

If I’ve had a financial failure, I need to take stock of what finances I have left.

If I’ve had a relational failure, I need to take stock of what relationships I have left.

If I’ve had a moral failure, I need to look and say, “What is God still doing in my life?”

As you take stock of your life in starting over, you need to ask yourself three questions:

If you want to change your circumstance, it takes faith.

If you want to change your personality, it takes faith.

If you want to change anything in your life, you have to have some faith.

So, start expecting more of yourself, from God and of life. That’s the principle of faith.

For some of us, in order to start acting in faith we’ve got to stop having a pity party. This is a world filled with sin and because of that, life is unfair. But you have to go on with life anyway. The more time you spend wishing that your past was different, the more time you waste in 2020.

Have you ever realized that when you set goals, you’re doing a faith activity?

Goals are statements of faith. A goal is simply a dream with a deadline put on it. It’s saying, “I believe God wants me to do this by a certain point in time.”

It’s a statement of faith.

You need to set some goals for your life in 2009: personal goals, family goals, every kind of goal in your life. Have a number of them.

Even though the odds of achieving every goal on your list are slim, goals are good because they give life direction.

Some people don’t like to set goals at all because they are afraid of failing them. But really, failure is not setting a goal in the first place. On top of that, fear of failure is far worse than failure because it is hard to get rid of because fear is inevitable.

Faith is not the absence of fear. Faith is moving ahead in spite of your fear – it is doing the thing you fear the most.

Where do you need to act in faith today?

Where do you need to take steps of faith to start over?

There’s one other thing that will keep you from acting in faith in 2020. It’s worrying about what other people will think.

When you start worrying about what other people think, the Bible says it is a trap. Proverbs 29:25 says, “The fear of man is a snare, but the one who trusts in the Lord is protected.”

Let go of the past by confessing your sins and experiencing forgiveness by God’s grace. And focus on God’s truth instead of the world.

Meditate on it, grapple with God’s Word, maybe write it down on a card, memorize it, or think about it over and over. As you fill your mind with God’s Word, it begins to change your thoughts.

That’s where the change takes place.

Trust God to help you succeed. Depend on him and not on yourself.

You can’t change on your own.

Zechariah 4:6 says, “`You will not succeed by your own strength or power but by My Spirit, says the Lord.’”

Would you like to wipe the slate clean?  Have you ever thought, “I’d like to redesign my life from the ground up?”

When someone becomes a Christian, he becomes a brand new person inside. They are not the same anymore.

God says, “I don’t want you to turn over a new leaf.  I’m going to give you a whole new life.”

Copyright © 2020 by Jeff Swart @ http://jeffswart.com. Used with permission. No part of this article may be reproduced or reprinted without permission in writing from Lifeword.org.