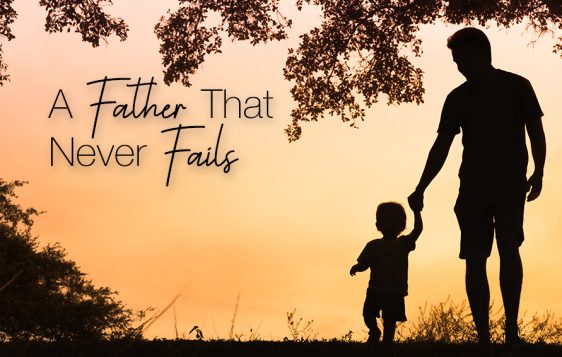 Everyone has a mental image that pops into their head when they think of the word “Dad.” For some, it’s white sneakers stained green from mowing the lawn. Jean shorts. A grill on the back porch. The timeless and embarrassing “dad jokes.” For others, it might be a three-piece business suit. A briefcase. Others still might think of a burly country boy with a thick beard and a camouflage baseball cap. Some may not be able to conjure up a mental image at all.

I am blessed to have a godly dad, but not everyone can say the same. Although everyone has a biological father, they may not have a dad present in their lives. Maybe it was because of a divorce, or maybe because of a tragic death, but there are many people who don’t get to celebrate Father’s Day because they don’t have a dad.

From the time I was seven years old, my dad has been in ministry—first as an associate pastor, and then as a head pastor from the time I was ten. Because of this, I had the opportunity to grow up in a home saturated with Bible teaching. My dad is a diligent worker. He spent much of his time during my childhood and teenage years at the church office, studying or running some other facet of the church. But he always made time for me and my siblings. He knew that there was a balance, and while ministry was his calling, he was first called to be a godly husband and father.

I am also blessed with a godly father-in-law. My wife grew up on the mission field in Romania. Her dad planted and pastored a church there. Much like my dad, he was dedicated to his ministry but also to his family. He provided a godly example to my wife of the kind of man she should look for in a husband. And cliche protective father-in-law jokes aside, he and I have a great relationship that I’m thankful for.

(And by the way, both my dad and hers perfectly fit the image of the white-sneakered, backyard-grilling dads I mentioned earlier.)

These are not the only godly father figures in my life, though. Both my grandpas fill that role. Men in the churches I have attended throughout my life have been great examples as well. I have been blessed by God to know so many spiritual and upright men in my life.

But as I said earlier, not everyone is so lucky. Some may have grown up in a household with no father figure—or with a negligent or abusive one. For those people, Father’s Day might be a terrible reminder or an event they outright choose to ignore. If they are blessed, maybe another man in their life took up the slack. A coach. A teacher. An uncle or grandfather. For the less fortunate, they may never have seen a role model of what a man should be.

For those who have good fathers and those who don’t alike, there is One who is the ultimate example, however. Jesus refers to God as the Father often throughout the Gospels, especially in the Book of John.

Unlike a negligent earthly father, God will never abandon us. John 10:29 says, “My Father, who has given them to Me, is greater than all. No one is able to snatch them out of the Father’s hand.” Hebrews 13:5 says, “…He Himself has said, I will never leave you or forsake you.”

It can be hard for those without a good father figure to imagine God as a good Father. They don’t know what that means, and many take that title and imagine God as overbearing, demanding, or uncaring. But as we look at the life of Jesus and see how he exhibits the traits belonging to a gentle, loving Shepherd, we can begin to understand how God loves us. After all, in John 10:30, Jesus says, “I and My Father are One.”

If you have a good relationship with your dad or the other father figures in your life, I hope you have a great Father’s Day filled with laughs and reminiscences. But if you don’t, and the upcoming holiday seems lonely to you, remember that there is a perfect Father who loves you more than any human could, and who is ever close to your side if you simply have faith in him.