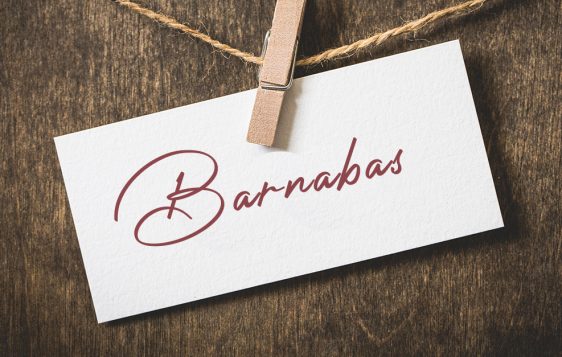 Barnabas was, in my opinion, the greatest man in the New Testament other than Jesus.

Because Barnabas was an encourager.

His name literally means “son of encouragement.” We see him mostly in the book of Acts, and he is also suggested as one of the possible authors for the book of Hebrews.

There are several things we can learn from him and transpose into our lives:

Actually, if you remember, Ananias and Saphira tried to copy Barnabas and get glory for themselves instead of having a generous heart for the poor. They also sold their land and laid it at Peter’s feet . . . only for them both to be struck down by God for lying to the Holy Spirit.

2. He was bold. Barnabas was the one who believed in Paul when no one else did and if there had been no Barnabas—there would have never been a Paul.

After Saul of Tarsus was saved, he returned to Jerusalem to serve the Lord with the apostles (Acts 9:26).

The apostles did not believe that Saul had been saved. They thought that it was a charade—that Saul was trying to infiltrate the ranks of the Apostles to get the names of more Christians that he could persecute.  But Barnabas stepped forward and told the apostles that Saul was now a brother in Christ, and the Lord had used him mightily to preach the gospel in Damascus and so they accepted Paul into the fold (Acts 9:27).

3. He was a leader. Barnabas realized when he needed help and knew how to build up someone to help. While he was ministering in Antioch, there were many people being saved and Barnabas could not disciple them all by himself (Acts 11:22-24). So he went to Tarsus, found Paul and persuaded him to come to Antioch to help him (Acts 11:25, 26).

4. He was a man on mission for the Lord. Paul and Barnabas were traveling companions on the first missionary journey (Acts 13:2-14:28).

I’m sure that Barnabas was a constant source of encourage­ment to Paul on the way. In Lystra, Paul was stoned and left for dead (Acts 14:19). And the very next day, Paul and Barnabas left for Derbe and the Scriptures state that while they were ministering there they were “strengthening and encouraging them to remain true to the faith,” (Acts 14:22).

First off, it’s remarkable that Paul was able to get up and go after being stoned (he was stoned three times and left for dead, by the way). And secondly, he kept going because he had a friend on the same mission as him and they encouraged others, even after being physically persecuted for believing in Jesus.

5. He did not give up on people. Barnabas took John Mark with him on another missionary journey, even after Mark had deserted him and Paul on heir first missionary journey (this is actually why Paul and Barnabas separated, Paul did not want Mark on his team and Barnabas did). But Mark was the same Mark who wrote the second Gospel, which means if Barnabas hadn’t believed in Mark and chosen him again, this book may have never been written.

6. His joy was contagious. The Scriptures say, “When Barnabas arrived and saw the evidence of the grace of God, he was glad and encouraged them all to remain true to the Lord with all their hearts” (Acts 11:23). Barnabas brought joy and positivity wherever he went, and it was noticeable. He was the opposite of a “Debbie Downer” and more like a Tigger.

Other than Jesus, Barnabas was the greatest man in the New Testament. From his generosity to his encouragement he is a man we should all try to emulate