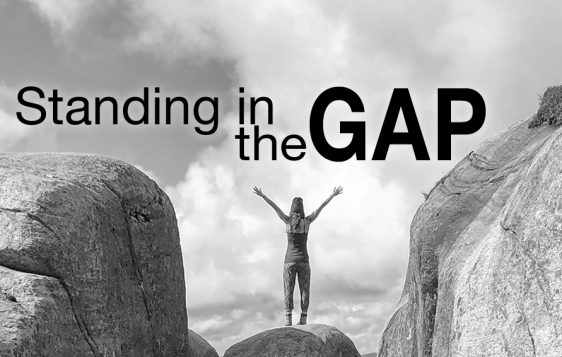 There is a gap that exists between us and God that was created when sin entered the world through Adam and Eve.

Sin separates us from God because He is holy and cannot tolerate sin.   As a result, the presence of sin in our nature and in our world makes it impossible for us to attain a level of righteousness to bridge that gap and allow us to be in relationship with a holy God.  Because of His love for mankind and His desire for a relationship with us, God chose to make a way to bridge that gap. Romans 5:8 says, “God demonstrated His love toward us, in that while we were still sinners, Christ died for us. Two verses later it describes that sinful state as being an enemy of God’s.

In other words, it was when we were at our worst that God gave this gift of His mercy and grace.

When we accept God’s gift of forgiveness and become followers of Jesus, we are also called to extend this same mercy and give the gift of grace to those around us who also fall short of doing what is right. I don’t know about you, but I find it quite challenging to be merciful to someone when they are “at their worst.”  If you think about it, when someone is at their worst IS when they need grace the most. Truthfully, that is when I need it the most as well!

In the process of writing this article, of course, thoughts, ideas and observations on this topic are at the forefront of my thinking, and I found myself in the following situation that demonstrated vividly my nature to fight against giving grace to people at their worst:

While driving down the highway I came upon a section of road under construction. The signs indicated that in one mile all the traffic would be reduced down to one lane. When we were within 500 feet of all us needing to be in one lane, there were several cars that, as quickly as they could, got in the lane that was closing to try to get to the front of the line and force their way back into the open lane. I don’t know about you, but in situations like this I tend to have conversations in my car with people in other cars, and I found myself saying, “You know if you would be considerate and drive safely, I would be glad to let you over but . . . ”  Immediately, I realized that I was not willing in that moment to give grace to people who were not at their best, much less at their worst!

God does not require that we earn His grace and wants us to extend this same mercy to others.  Driving in the car is a very minor example of the situations that we encounter where we could and should show grace in the gap between our expectations of right living and another person’s sinful/hurtful behavior.

Humans tend to have higher expectations of family, friends, and other believers because we feel like they should either know us well enough to know how to interact with us or we feel like they should know what is right and wrong and we expect them to live accordingly.  But if we are honest with ourselves, we often do not hold ourselves to that same standard.  Some of us regularly give ourselves a pass or justify our behaviors with an excuse or explanation that includes pure motives even if the action did not convey it.  Others do not give themselves, much less anyone else, the benefit of a pass or the possibility of a hidden but pure motive.

Unlike God, we do not have ability to see the heart of others and so rather than jumping to retaliation, God asks that we mimic His example of forgiveness.  Because of our sin nature, even if we knew the motives of another person, we cannot be satisfied with true justice.  We desire to take our retaliation to the next level.

The only option left that gives all of us freedom to have peace, hope, and relationships is to forgive. Forgiveness doesn’t give permission to repeat the same sinful behaviors, it gives permission to try again for right behaviors.

All of us will struggle in this sinful body of flesh until we reach heaven where God will give us  “robes of righteousness” and replace these old sinful bodies with new, immortal, and perfected ones.

In the meantime, I will leave you with this encouragement from Romans 12:16-18:

“Live in harmony with one another. Do not be haughty, but give yourselves to humble tasks.  Never be wise in your own sight.  Repay no one evil for evil, but give thought to do what is honorable in the sight of all.  If possible, so far as it depends on you, live peaceably with all.”

What a wonderful recipe for how to give grace to others in the gap:

Copyright © 2021 by T’Shana Everitt @ https://www.yourfuturehope.com/. No part of this article may be reproduced or reprinted without permission in writing from Lifeword.org.