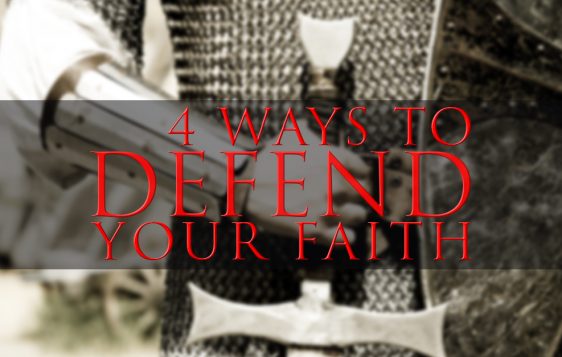 If theism (God exists.) is a blue pair of glasses, atheism (There is no God.) is a red pair, and pantheism (God equals the universe.) is purple; how do we, who are seeing the color blue, explain the color blue to someone who can only see red?

Well, in the end, God himself has to take off a person’s red lenses and help put on the blue lenses; much like how the scales fell from the Apostle Paul’s eyes in the New Testament.

It’s our job as Christians to be able to defend the blue lenses we are wearing and to explain how this perspective is true so that the atheist or pantheist would desire to put the blue lenses on.

Being able to defend your faith is a necessary skill in this post-modern world. However, knowing where to start might seem like an insurmountable challenge for many people who have never studied the topic of apologetics, the study of our present reality and the different worldviews that we look through to observe our reality.

There are four arguments that many apologists utilize when defending the Christian worldview: the Cosmological, the Ontological, the Teleological and the Moral arguments.

#1 Cosmological – This argument stresses that every effect must have a cause.

The universe has a beginning, so what caused that beginning?

If the universe came from nothing, from random chance as many people believe in this day and age… does that logically make sense? That nothing created everything?

Or is it easier to believe that something, an all-powerful, all-knowing, all-present God created the massive expanding universe with a big bang?

#2  Ontological –  A philosopher’s favorite, this centuries-old argument is based on deduction and reasoning. It is based on how the concept of a God proves God’s existence.

This is broken down into two attributes of God – his perfection and his necessity.

If God is perfect, an absolutely perfect being cannot lack any perfection including existence; if it didn’t exist it would not be perfect. Therefore, God must exist.

Likewise, if God exists, he must be a necessary being, and if he is necessary, then he must exist in order for the world to exist.

Although this argument cannot fully prove the existence of God, it can prove certain things about his nature like God must necessarily exist if he exists at all… He cannot cease to exist or only exist contingently.

#3  Teleological – Most Christians, even if they don’t realized it, have heard this argument before. It is the argument that says the world shows a great design; therefore, there must be a great designer who designed it. Like a watchmaker designs a watch, so God designed the universe.

This is a favorite for people. Since there are many scientific facts and wonders that are so specific and articulate, it is easier to believe a designer designed it rather than random chance.

For example, if gravity, the position of the sun or the earth’s atmospheric levels, were off by just a smidgen, life would not be possible on earth. There is a reason our world is called the Goldilocks planet and we haven’t found life anywhere else in the universe.

Wouldn’t it take more faith to believe that eyes (by chance and over eons of years) slowly developed on people’s faces?

Or that the cell came to be and became a fish which evolved over millions of years to become a monkey, which became a human because of natural selection?

#4 Moral – Most people would say that murdering babies is wrong, that rape is wrong, that stealing is wrong, that cutting someone off at a roundabout is wrong . . . But why is that? If we are just a blob of stardust that evolved into a living organism why should we know what’s right and what’s wrong?

Why should we care about morality?

Other species on earth have no concept of morality… How can you tell a shark, “no, don’t bite me, that’s bad,” when he is just looking for his lunch?

The Bible says in Romans 2:12 that the law of God is written on our hearts. Therefore, humans have a concept of morality, meaning that there must be a moral lawgiver for us to know and understand moral law.

If there was no God or moral law giver, why should humans care about what is right or wrong? Why have police officers who enforce a law? Why a judicial system to keep criminals in check?

Why have a hope for life at all if the world is random chance, and there is no purpose for the world or the universe? Where would your purpose or morality come from if there is no afterlife? Why do humans long to live forever?

It is because the God of the universe has placed eternity in our hearts, and we long for something more, we long for a purpose and a relationship with our creator. And that proves that God exists!

All of these arguments are solid tools for your apologetic toolbox, but there is one tool that is even more vital. . .

When you talk to people about your faith, the most important thing to remember isn’t the statistics or the key aspects of certain arguments, it’s that Jesus loves the person you’re trying to persuade.

Also, we can’t knock people’s worldview glasses off their heads . . . Only God and only that person can decide to change his or her worldview.

Our goal should never be to prove how smart we are with apologetics, but how awesome and loving God is. Only then can we lead others to the truth of the gospel so they can see it clearly.

Copyright © 2019 Lifeword.org. All rights reserved. No part of this article may be reproduced or reprinted without permission in writing from Lifeword.org.