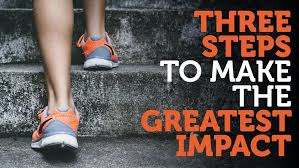 I’m going to assume you’d answer those questions with a resounding, “Yes.”

But how do you do that? How does a person truly make a difference in the world? This question is worth discussing because it seems like the mainstream culture is charting the course for how impact is accomplished.

The current culture is teaching our next generation that if you want to bring about change, do the following:

Listen, there is a better way.

What if we followed the example of our Savior, Jesus Christ? No, I don’t expect a lost world to live or look like Jesus. However, if you are a follower of Christ you are called to live and look like Jesus. You shouldn’t conform to the patterns of this world (Romans 12:2) because you are a new creation 2 Corinthians 5:17) created to do good works, so walk in them Ephesians 2:10)!

How did Jesus impact the world? How did one man turn the world upside down even though he never wrote a book, never owned a house, and never ran for political office? Jesus impacted his world in three ways.

Believe it or not, Jesus’ primary focus was not to draw a crowd. Sure, there were times when a crowd naturally formed, but Jesus knew the crowds were fickle and would soon turn on him. If Jesus wanted a large platform he could have rented out a massive coliseum and packed the pews with the promise to perform some miracles.

Instead, Jesus got involved in the lives of twelve men.

Think about it. If Jesus spent just five minutes one-on-one with individuals for twelve hours a day, without breaks, he could talk to 144 people per day. Over the course of three years, Jesus would have spoken to a little over 150,000 people if he never took a day off. Not too shabby!

Yet he would not have impacted any of them. You can hardly impact a person’s life in five minutes. Jesus chose a different route. He opted to be deeply involved in the lives of twelve guys.

If you want to make a real impact, get involved in the lives of a few. Get involved in your neighbor’s life, your child’s baseball team, or your co-worker’s life. Start by being present in their lives, but be purposeful about growing the relationship to a deeper level.

Jesus never fired a disciple. And it’s not that there wasn’t due cause! The disciples frequently goofed up; argued about childish things; and sometimes allowed Jesus’ teaching to fly right over their heads.

Yet Jesus never gave up on them.

In order to make a real impact, you must be committed for the long term. Don’t be a flash in the pan, one-off, sideshow. Start investing in someone’s life through the ups and downs.

Jesus’ influence was built on two things: trust and relationships. He didn’t hold a title (other than Son of God!), a degree, or a position. He used relationships to build trust and grow His influence.

Through trust, you must earn the ability to speak into someone’s life. Without relational influence, you aren’t making impact. You’re only making noise. The only way we can turn off the dark is by turning on the Light.

Do you want to make an impact? There’s a right and wrong way to do so.

Impact – “to leave an impression.”

Think about it. What impression are we leaving the next generation? I pray they see Jesus.

Copyright © 2021 by Andy Comer @ https://antiochgt.com/blog/3-steps-to-make-the-greatest-impact/. No part of this article may be reproduced or reprinted without permission in writing from Lifeword.org