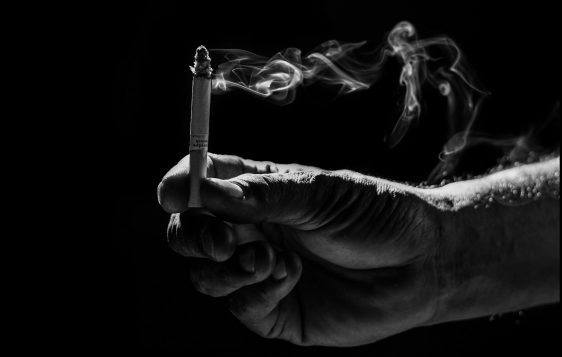 I remember in the 80’s and early 90’s when you would see cigarette commercials on TV.

For example, the Marlboro man was a rugged character and women would swoon over him.

Magazines depicted how fun it was to smoke with beautiful people posed, smiles pasted on their faces with white teeth and not a trace of wrinkles.

At first, you don’t see a lot of the effects of smoking.

You might see your fingernails turn a little yellow. Your teeth might turn a shade, and you might have a little cough, but ultimately, the effects aren’t immediate.

It isn’t until years later, after you’ve been smoking for a while, that the signs really start to show.

It gets harder to breathe, your teeth are definitely worse by now, your wrinkles edge your lips and your face. Your cough is worse, and you are short of breath far too often.

Smoking is the leading cause of lung cancer.

It leads to Emphysema, asthma, COPD and a host of other issues including increasing your risk of being diagnosed with a heart disease.

People die slow and painful deaths because of cigarettes.

My father was one of them.

While the effects aren’t evident in the beginning, there are most definitely consequences to come.

One of Jacob’s sons, Reuben, the first-born, also wasn’t able to see the long-term effects of his choices.

“While Israel lived in that land, Reuben went and lay with Bilhah his father’s concubine. And Israel heard of it.” (Genesis 35:22)

Was it right in the first place for Jacob to have a concubine? The answer is absolutely not.

But as you’ve been told your whole life, two wrongs don’t make a right. Jacob would have to deal with his own sins. The focus here is on Reuben’s actions – he slept with his father’s concubine, who, by the way, was the mother of Naphtali and Dan, two of his half-brothers.

But nothing else is mentioned about it here.

Just that it happened.

In fact, Reuben may have thought he had gotten away with it without the consequences.

But, it’s not until Jacob is on his deathbed, delivering the final blessing to his family, that the double portion intended for the first born is given to someone else (Genesis 49:4).

Just like the effects of smoking on a person, it could be years later before they start to show up.

Our sins may not always have immediate consequences, but the truth is, we will have to pay for them.

Today, if you are living a life that pursues anything other than God, turn away from it.

It’s never too late to make a change.

You may still suffer some of the consequences of past since in this life, but when you trust in Jesus, you accept his payment for the guilt of them.

You will not suffer God’s wrath.