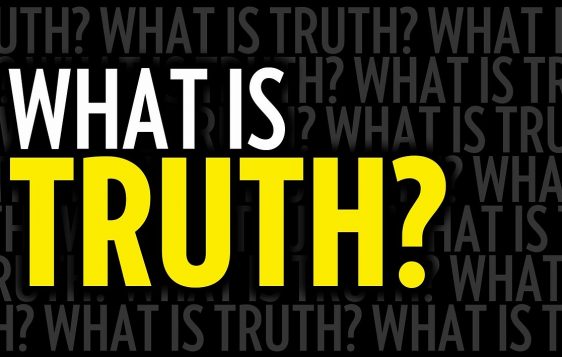 In polls taken by Gallup, Barna, and others, Christians consistently rate themselves high in relationships and low in the area of Bible knowledge.  Barna chose seven characteristics for measuring spirituality and Bible knowledge scored the lowest.

So what do people believe about Truth and the Bible?

More than half of Americans say that the only way to find truth is through experience rather than from a book like the Bible.

Two-thirds of those who declare themselves “born-again” say that they do not believe in absolutes.  Truth, they say, is not even obtainable, and people should just stop looking.

The ruling authority today is the “autonomous self” with truth being determined by the way each individual experiences the world, how they feel about what happens, and how they think about it.

Society has almost stripped our world of any absolute truth and morality.

So which one is it?

Is truth based on one’s experience?

Is truth about what each individual “feels” or “thinks” or “believes”?

Or, crazy idea, is truth found solely in the Bible?

Over half of all Americans claim to be “born again” but fewer than one in ten has even the foggiest notion of what it means to be a disciple of Christ in biblical terms. Christianity is about truth, but if a believer is not grounded in the truth they will be shallow, self-absorbed people.

The answer is sola scriptura, and it is a battle cry for truth. The word sola is the idea of “alone,” “ground,” “base,” and scriptura means “writings” and it refers to Scripture. Yes, the Bible.

Sola scriptura means that Scripture alone is authoritative for the faith and practice of the Christian.

The Bible is complete, authoritative, and true. “All Scripture is God-breathed and is useful for teaching, rebuking, correcting and training in righteousness” (2 Timothy 3:16).

Five hundred years ago Martin Luther, the great reformer, said, “a simple layman armed with Scripture is greater than the mightiest pope without it.”

Hearing the Word is not hard, but holding fast to it is a different matter.  Unfortunately, some of the voices in Christianity are more interested in feeling better about themselves and being satisfied that they have proclaimed the truth.

There’s even the belief that you can be taught how to receive your own private miracles and learn the way to guaranteed riches.

Today, many churches and ministries are about everything but truth. Before we judge others too harshly, though, what about us?  What am I doing to proclaim the truth?

Randy Alcorn Tweeted, “There’s a greater shame than not believing in Hell—that we who do believe in it make little effort to keep others from it.”

How can we say, truthfully, that we are followers of the person of Christ if we are not fulfillers of the purpose of Christ?

Christianity is first about truth.  Secondly, those who say they speak the truth must model the truth by their integrity.

Christian truth is simply not amendable to adaptation, but requires application for all of its followers:

What a difference it would make if the unbelieving world had to admit that Christians overwhelmingly were a people who lived by truth!

What difference it would make if non-believers could say, “Well, I don’t agree with them, but I can tell that Christians believe what they say by how they live.”

What if the unbelieving world saw that Christians cared about the inner city full of the lost, the last, and the least as much as they do about the cozy suburbs and small cities?

The evidence should be undeniable that Christians not only talk about the love of God but they love others just like Jesus did.

In J.D. Payne’s Discipleship in Church Planting (downloadable for free at www.jdpayne.org) he says, “Clearly, right doctrine must be communicated, but there is more to the Great Commission than orthodoxy (right belief).  Orthopraxy (right practice) is a must.”

He goes on to say, “Church planters must work diligently to keep the discipleship process simple, such is the biblical way. Keeping it simple means teaching Biblical depth.”

A major point of Payne’s writing is how many have tried to disciple from the corporate level (a church full of people) hoping that the trickle down effect will bring about spiritual maturity in the individual.

There must be a return to individual discipleship!  Payne warns this:

“The temptation to focus on the corporate level, at the sacrifice to the individual level, must be overcome. Though it is not glamorous to spend more time with a few individuals as opposed to a crowd, it is necessary for healthy church growth.”

Copyright © 2020 Lifeword.org by Larry Barker. All rights reserved. No part of this article may be reproduced or reprinted without permission in writing from Lifeword.org