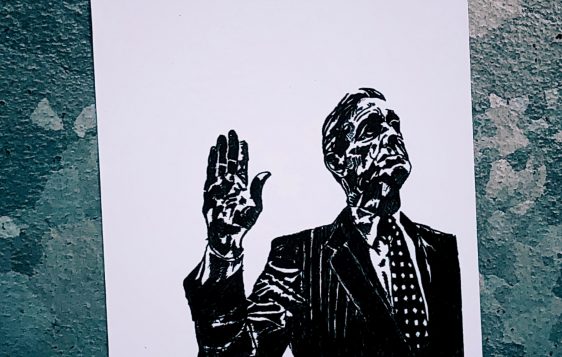 In people’s lives, there must come a time when they decide for themselves what they really believe. Because I grew up in a Christian home and, from the time I was ten years old, a pastor’s home, I’ve known the Bible for as long as I can remember.

But there was a time when I had to choose whether I believed it for myself and not just because it was what my parents taught me.

The first time I chose this, of course, was at the moment of my salvation at the age of nine. When I put my faith in Jesus Christ to save me and become the Lord of my life, I was making a statement, even if I didn’t fully realize it at that age. I was publicly saying that I did believe, by my own choice, that the God of the Bible is the true God and that Jesus is my Savior.

But even after the moment of salvation, we must continue to choose to believe in Jesus and not just so we can continue to be saved. (Once we have put our faith in him, of course, we can never be “unsaved.”) Instead, this “continuing to choose” is for the purpose of focusing our lives on Jesus, serving him and reasserting that belief for ourselves.

This happened for me early in my college career. For the first time, I began to question–not doubt, because I still truly believed he was God–and ask myself, “Do I really believe all this? Why do I believe it? What am I doing about it?”

The answer I came to was that I did believe it, and because of that I had to surrender my life to serving God.

In today’s world, faith is something that is considered as relative as morality and truth. People will say that there are many ways to heaven; even so-called Christians will say that if non-believers “genuinely believe” whatever they’ve put their faith in–whether that is themselves or a false religion–they can still make it to heaven on the genuineness of their faith.

But, like morality and truth, faith is not relative. There must be a definite answer to what we should believe in to get to heaven–there must be an absolute truth. Otherwise, why would Jesus die? If we could get to heaven by other means, what would be the purpose of his sacrifice?

In the Bible, Jesus says, “I am the way, the truth, and the life. No man comes to the Father except through me.” By “the way,” Jesus meant that he is the only way to heaven. Only faith in God will save us from the eternal death brought by sin.

So, if Jesus is the only way to heaven and it is the responsibility of Christians to share that with the lost, how do we effectively do that in a world where a valid response seems to be, “That may be your truth, but it’s not mine”?

Way #1: The patient building of relationships. People are more likely to listen to friends and loved ones than they are to strangers. While we should still witness to strangers when we have the opportunity, more often than not lost people will be saved because of the gentle, continual prodding of someone close to them.

Way #2: Personal testimony. While this can also lead to a true-for-you-but-not-for-me response, it cannot be outright rejected. When we give our testimonies, we are telling about something that happened to us specifically.

People can try to reject the Bible as false, but they cannot do the same with our testimony, because we have lived it.

Way #3:  Apologetics, the practice of defending our faith through logic or facts. Apologetics is a skill that must be learned and practiced, but it can be an effective tool. Believers such as Ravi Zacharias have used apologetics to effectively counter arguments of even staunch atheists and members of other faiths.

Way #3: The most effective method of reaching the lost in a morally relative world is prayer. As we witness, as we grow relationships and share our testimonies and beliefs, we must cover the lost in prayer, pleading with God to draw them so that they may see the truth.

John 6:44 says, “No one can come to me unless the Father who sent me draws him.” God is capable of drawing the hearts of unbelievers to Jesus. In fact, that is the only way we can be saved–when He uses a message or a person’s testimony to draw us, and we respond in faith.

So, as we witness to the lost, even if they respond with a relativist motto, we can continue to pray that God will draw their hearts and reveal the truth of the gospel to them, so that they can then act on that truth and put their faith in Jesus.