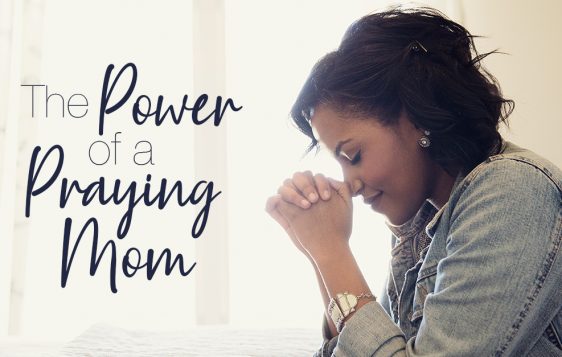 I recently wrote that Augustine, though raised by his Christian mother to love Jesus, was not a Christian for a part of his life – he was lost in non-Christian spiritualisms, intellectual pride, and lust.

One very important person I left out of the post last week that was instrumental in Augustine’s conversion was his mom, Monica.

Like many guys, Augustine didn’t think much of his mother’s beliefs while he was young. He thought his intellect was superior to her life experiences – again, not much has changed in the last 1,600 years.

Slowly, her fervent, tear-soaked prayers and the gracious example she was setting before Augustine met with the people God were placing into Augustine’s life at the right time and Augustine became a Christian.

Later, he wrote extensively on how her prayer and example changed him. Monica probably had no idea that Augustine was even watching, but he was. Augustine wrote this about his mom:

And You sent Your hand from above, and drew my soul out of that profound darkness, my mother, Your faithful one, weeping to You for me, more than mothers weep the bodily death of their children. For she, by faith and the Spirit which she received from You, saw the death that I was in, and You heard her, O Lord; You heard her, and looked favorably on her tears as they streamed down, watering the ground under her eyes in every place she prayed, yes, You heard her. (Confessions of Augustine, Book Three).

So, how did Monica do this? How did she influence her son to repent from his sin and lead him to Christ?

Through these three things, her faith eventually helped lead her son to Christ. Augustine wrote that her influence also helped lead her unbelieving, hot-tempered, and unfaithful husband to Christ later in life.

Like Jesus said, “always pray and never give up.”