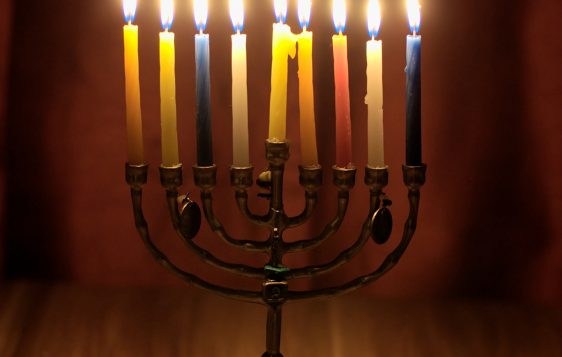 You may have seen a menorah, maybe heard a song about a dreidel, seen golden chocolate coins for sale in December or have heard bits and pieces about the holiday of Hanukkah.

I grew up celebrating both Hanukkah and Christmas since my mother and stepdad adhere to Reform Judaism. Sadly, the most I remember from celebrating it personally is losing a lot in dreidel even though the game could last for hours depending on how many coins we played with.

Now, looking back on why this holiday is celebrated and what it is celebrating, I have a deep respect for it as a Christian and I think Christians can learn a few things from it.

1. Hanukkah in a nutshell. The story can be found in 1 and 2 Maccabees, historical books that are not divinely inspired but still considered accurate Jewish records.

The scene for the Jewish people is dark: The Greeks have taken over Jerusalem, desecrated the temple and persecuted those who refuse to forsake their God for the Greek gods. So a revolt happens with Judah Maccabee at the helm who leads the people to independence in 165 BC and they are able to rededicate the temple of the Lord.

Every year, Jews still celebrate Hanukkah, or the Feast of Rededication, in celebration of God’s deliverance.

2. The servant candle. Hanukkah is also known as the Festival of Lights. Legend says that when the Maccabees rededicated the temple, they found only enough consecrated oil to last for a single day. Miraculously, the oil burned for eight days, long enough for more oil to be consecrated.

There are eight days to Hanukkah and on every night a menorah is lit from left to right accompanied by blessings and according to the day then placed in a window. However, there is something interesting about lighting the menorah – there are nine candles for eight days. This is because the ninth candle, known as the “shammash” or servant candle, is used to light the other candles.

Now, to me as a Christian, I see Jesus in the shammash candle.

A core virtue Jesus preached was humility, even to the point where he washed his disciples’ feet to show what he meant. Now, the job of the shammash candle is to light all of the other candles.

Doesn’t Jesus do that?

Humbling himself, he became a man sent to seek and save the lost. And he is the one who brings light into our lives and into our hearts.

3. Honoring sacrifice. Through song, games, food, gifts, charity and lights, Jews celebrate this type of independence day. The principles of freedom, deliverance and remembering peoples’ sacrifice are present in Hanukkah every year.

The Jews were free to worship God again without facing the fear of death.

The Jews were delivered from the tyrant Antiochus who sacrificed pigs to Zeus in the temple and who tried to force the people to reject their faith.

Many Jews were martyred for what they believed in. When they would practice the sabbath or keep a kosher diet, they were killed if they were found. Hanukkah is a time to remember these sacrifices too.

Can’t Christians also celebrate the fact that we can worship God freely and how he has delivered us into freedom from sin? Yes, I believe we can.

4. Looking forward in hope. In 165 BC they were looking ahead for the Messiah. To this day, the Jews are still looking for the Messiah because Jesus did not overthrow Rome or establish a kingdom of peace on earth. However, many Reform and Conservative Jews believe in a messianic age and not a messianic person anymore.

Nevertheless, the Messiah was prophesied in hundreds of Old Testament passages, and Christians believe he came 2,000 years ago – the Savior of the world, which is what we celebrate on Christmas day. (Jesus was not really born Christmas day because the 25th of December was actually a celebration of Zeus’s birthday and quite the pagan holiday until the church decided to adopt the day initially dedicated to the sun god and make it the birthday of Jesus… another topic for another time).

But what I’m trying to get at here is that there is hope in this story. There is light at the end of the tunnel. When the world seems to be at its darkest hour, God shows up. And to Christians, Jesus is the light, the miracle and the reason for our deliverance. And therefore, it is easy to see Jesus in Hanukkah and to celebrate our hope in him, the Messiah.