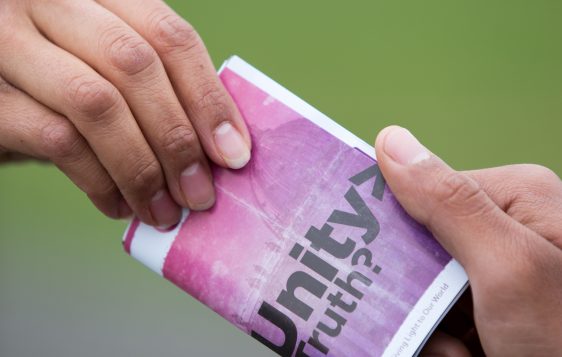 Has anyone ever said this to you in response to a moral argument or heard someone say it to someone else? In today’s world, this perspective seems to be becoming more and more common. If something is true for you, that’s great! But that doesn’t mean it’s true for me.

I had several coworkers when I worked in the secular world that held this worldview. It colored every conversation we had, even if the actual phrase “moral relativism” never came up. They’d ask me about church or about my beliefs, and they’d never deny what I was saying, because in their eyes, it was true for me. But nor would they acknowledge that it was true for them.

A co-worker once asked me, “Jake, what does Christmas mean to you? Outside of being Jesus’ birthday, I mean.” She wanted my perspective but not from my Christian worldview, because that wasn’t true for her. I gave her the best answer I could, but I was hindered by her not wanting to hear a Christian perspective.

Unfortunately, even the idea of facts seems to have fallen by the wayside. I recently saw a video in which a man told a young woman, “Those aren’t the facts.” Her response was, “You shouldn’t listen to facts. You should listen to fear, to your emotions.”

In a world where people feel their emotions and their fears are more relevant than facts, we face a difficult obstacle in reaching them.

This anything-goes mindset has even led to beliefs like the world being flat. How can anyone deny it, if all that matters is what is true for the individual? But even with this mindset, there are certain things that are unarguable truths.

The sky is blue.

The spin of the earth generates gravity.

These things cannot be argued, because they are facts–100% true. In the Bible, Jesus says, “I am the way, the truth, and the life. No man comes to the Father except through me.” Jesus admitted that he was truth. That is absolute. There is no other alternative, no option.

There will always be people who argue that this is only true for certain people. “Jesus may be the only way to heaven for you, but I believe…(fill in the blank).” These people are difficult to convince.

But Jesus also says, “No man can come unto me unless the Father draws him.” If we are faithful to witness to people, even when they reject our beliefs as “only true for us,” then God can work in their hearts. And if they will submit to his drawing, then they will see that there is truth–and that truth is Jesus.