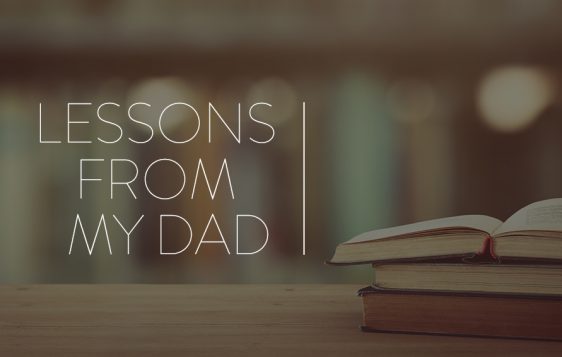 His full name was Robert Albert Baier, but to his three daughters (Barbie, Trish and me), he was Daddy Bob Robert (often shortened to “Daddy Bob.”) He was “Daddy” because that’s what the three of us girls called him (he always said “all my boys were girls!”); “Bob” because that’s what everyone else (but one person) called him; and “Robert” because our Grandma (that one person!) never in his whole life called her son anything but Robert.

Daddy Bob, who passed away in 2016, was a “good” man all his life and was one of those who would “give you the shirt off his back.” So many people have told me about ways he helped them at a time when they needed it most. And he was a great father to his three daughters.

There was only one problem — and it was a big one — Daddy was lost for most of his life.

Daddy Bob was saved just a short time before he came to live with my husband and me for all but two months of the last nine-and-a-half years of his life. My sister Barbie and I had witnessed to him many times, and one day when he was alone at home, reading his Bible, he prayed and asked Jesus to come into his heart. There was some shouting going on in his den when he told us what had happened. He was truly a changed man . . . still a “good” man by the world’s standards; but now he was the “best” man because he was God’s son and our little brother, as well as our beloved Daddy Bob.

My “Good” Daddy taught me many practical lessons, but the lessons he taught me after he was saved and became a “Best” Daddy were even better.

Daddy Bob didn’t have many rules when we were growing up, but one was “Don’t ever go out in public in hair rollers!” We never did figure that one out!

But some of the lessons he taught me were really practical and helpful:

• Memorize your Social Security number, and when you get married, memorize his, too. I can’t tell you how often that has come in handy during the years.

• Treat others like you want them to treat you. (He was raised a Catholic, so I’m sure he learned this Bible verse from his mother and at church.) As I mentioned earlier, Daddy Bob not only taught us the Golden Rule, he lived it!

• Work hard, and always do more than you’re required to do. Daddy always said, “If you don’t give your boss 110%, you aren’t earning what you’re getting paid.” My mentor, Mrs. Betty (Stanley) Beaird, reinforced that years later when she said, “Do what you’re asked to do . . . and then some!”

Of course, I could go on, but you get the picture. My Daddy Bob was always a wise, and “good” man. But what I saw in him after he came to live with us, shortly after he was saved, taught me so much more.

Many of the lessons Daddy Bob taught me during the time he lived with me were taught by example, as much as by words.

• Read your Bible daily. I’ll never forget the first day I walked into his room at our house and saw my Daddy reading his Bible. It was the first time in my life I had seen him do that and I couldn’t help but step back out of the room and shed tears of joy.

• Don’t be afraid to ask spiritual questions and admit it when you are wrong. Much of the theology Daddy Bob learned as a child was wrong and caused him some confusion — like hesitating to be baptized because he thought it would be “alien baptism.” It took the pastor and me to convince him that his christening as a baby in the Catholic church was only his parents’ commitment to raise him in that church and had nothing to do with his salvation and true baptism. But when he realized that he was wrong, he happily admitted it and was baptized in his 90s!

• Fill your mind with spiritual things. I’d also walk into his room and find him watching preachers on his television set. Of course, we had a few conversations about who to listen to, and who not to listen to —especially when I saw that he was watching Joel Osteen! Daddy was hungry to know as much about his Lord as he possibly could, and it was such a blessing to him.

• Love the Lord’s church and support it with your presence and your finances. The first thing Daddy did when he got to church the day he was baptized was to go to the office and get a box of offering envelopes! He only got a small Social Security check each month, just enough to cover his insurance, medicine and personal items, but he made sure the Lord “got his part” first!

Daddy Bob loved going to church, and he loved his Sunday school class. He was “hard of hearing,” so he always wanted to sit up front, presumably so he could hear better, but I really think it was because he just didn’t want to miss anything that was going on!

On July 4, 2016, the day before he passed away in hospice, I stood behind his bed and held up my iPad so he could see the services at his/our church — Oak Park Baptist Church in Little Rock. Even though he was very weak, I could see by the smile on his face that he was soaking it in and enjoying the service. I couldn’t help smiling through the tears that were rolling down my cheeks when the congregation sang “and on that day when my strength is failing, the end draws near and my time has come, still my soul will sing your praise unending . . . 10,000 years and then forever more!”

That’s how long I’ll worship our Lord in Heaven with you some day, Daddy Bob, “10,000 years and then forever more.” Thank you for these lessons, and so many more. Your little girl loves you.