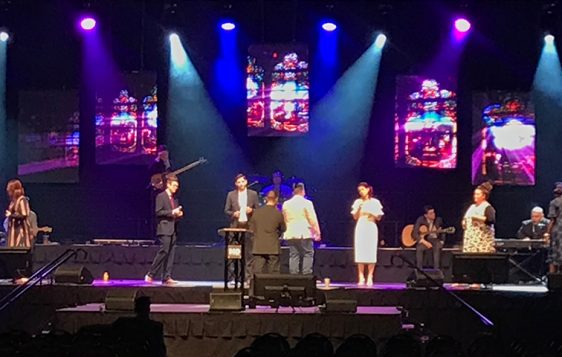 When I was younger, I remember my dad, who was a pastor, coming home from a preacher’s meeting. He and several other local pastors had gathered for a day of preaching and fellowship. During the fellowship, the topic of a church sound system came up. My dad was surprised by the number of pastors there who were opposed to the idea of having a sound system in church.

These days, having a sound system is almost a requirement for a church, and in the following years many of those pastors ended up getting sound systems for their own churches.

Even if it’s a traditional church that sings hymns and so doesn’t need all the equipment of a full band, the church still likely has the sound system if for nothing else than so the preacher can have a microphone and everyone in the audience can hear clearly.

And yet, there were still people opposed to it simply on the basis of it being modern technology.

How many older people who are hard of hearing would be unable to hear a preacher without a microphone? How many singers would be discouraged from bringing a special song before the church if they didn’t have a soundtrack to sing by?

More recently–just this past year, in fact–I watched a video of a pastor decrying earwig microphones, the flesh-toned mike that wraps around the speaker’s ear and hangs next to their mouth. It is an efficient and clear piece of technology, but this pastor was speaking out against it simply because Hollywood uses them.

He called them “flesh mikes.” Even in 2019, there are Christians who will speak out against technology simply because it’s new.

The problem with this is that if we ignore technology, we will become stuck in the past. Technology is not bad on its own. Technology is a manmade thing, and thus cannot have intrinsic good or bad value. Its goodness, or badness, comes from how we use it.

If we use it for the right reasons, with the right motives, for the glory of Christ, then how can it be bad?

In fact, there is a greater danger in choosing to abstain from technology than there is from using it. By pushing all technology away because we fear it or how it can be used, we become obsolete. The rest of the world is advancing, and it is doing so at a phenomenally rapid pace. If we don’t advance with it, then we will soon be left so far behind that we will become out of touch.

How can we reach the world if we’re stuck in the past?

Likewise, if we continue a ministry that is based on how the world was in the ‘50s, ‘60s, and ‘70s, we will soon have a church so old-fashioned that today’s culture will not understand it.

Technology is not bad. Technology can be used in amazing ways to further God’s kingdom. He gave us as humans the imagination to create these inventions so that with them, we can give glory to him.