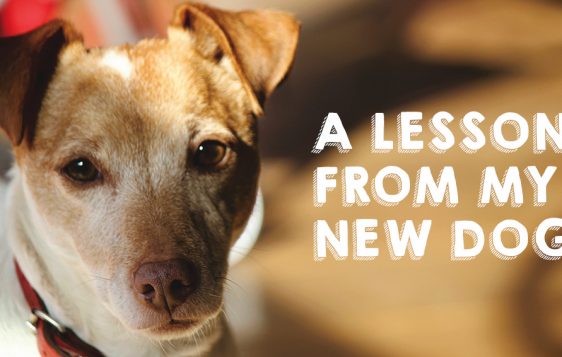 My husband and I adopted a dog this week.

At the shelter, he wouldn’t even come close to us, so we, out of blind faith, adopted him.

Since then, he’s evolved every day. When we brought him home, the first step was to build enough trust with him in order to pet him. The next day, he began to show a more playful side by confiscating any shoes or socks in his reach and moving them to wherever he desired they should be.

Yesterday, he learned how to chase a tennis ball.

Today we gave him a test: We left him alone for several hours for the first time.

Walking through the door arms loaded down with grocery bags . . . I noticed a few things askew: kibble bowl upturned and laundry raided and everywhere from the couch to the dining room table to the hallways . . . And just let it be until my husband came home to see it for himself.

That’s when we noticed a few more things. He had also knocked over his water bowl and, to our surprise, chewed off a corner of the entertainment center.

Needless to say, he’s lost his “I get to roam and destroy the house while my parents are gone” privileges.

Sadly, after the fact it’s hard to tell a dog he’s done something wrong. Dogs don’t feel conviction – though he may feel the consequences of his actions.

When we are kids, sometimes we act the same way. It’s hard for us to empathize with other people and really understand why something is wrong. We learn if our actions are “good” or “bad” based on the consequences:

We, however, evolve and grow. We learn there are consequences for our actions, and even Newton’s Laws back it up.

But conviction is entirely another thing to learn.

This type of conviction is not guilt or shame or worldly sorrow that leads, but an awareness of our life that leads us to repentance and salvation (2 Corinthians 2:10).

How is this conviction learned?

I think we have to become self-aware or God pushes us to the point where we can finally see, with opened eyes, the true effects of sin. God can use his Word, people or circumstance to bring us to a place of conviction – but in the end, we are the ones who have the free will to repent and turn to him or give in to sin, which leads to empty pleasures and eventually, meaningless death (Ecclesiastes 2:1).

If you can remember the guy swallowed by the fish in the Bible – Jonah – he had to learn conviction the hard way – through consequences. The people he was ordered to preach to were saved from consequences by showing conviction and repentance.

In the first verse of the book of Jonah God orders the prophet Jonah to go to Nineveh, the capital city of Assyria, and preach against their evil behavior.

Instead of immediately following God’s command to bring his Word to Israel’s enemies (This kingdom would invade the nation of Israel forty years later and send the inhabitants into exile.), Jonah jumps on a ship headed the opposite direction – Tarshish – to escape the Lord’s presence.

For a prophet, you’d think he would have had a better plan.

But instead, he wakes up in the middle of the night with the crew frantic and praying as the ship was literally about to break in two as God had sent a massive storm.

Jonah confesses his crime to his fellow shipmates and tells them to toss him overboard so the weather will calm down. The prophet is tossed overboard, which does the trick, and the sea stops raging (to the awe and wonder of the sailors).

Instead of drowning, God appoints a great fish to swallow Jonah where the prophet has a “come to Jesus” moment in the stinking belly of the whale.

He decides to pray:

“I called to you from the land of the dead,
and Lord, you heard me!
You threw me into the ocean depths,
and I sank down to the heart of the sea.
But you, O Lord my God,
snatched me from the jaws of death!
As my life was slipping away,
I remembered the Lord.
And my earnest prayer went out to you
in your holy Temple.
My salvation comes from the Lord alone.” (Jonah 2)

After Jonah genuinely repents, the Lord orders the fish to vomit Jonah out onto dry land. He’s given the same call from God to go to Nineveh and preach, and this time he’s learned his lesson and heads in the right direction.

Jonah preaches to the Assyrians that God would destroy their city in 40 days. The Assyrians choose to listen and the entire city, even animals, humble themselves, fast and call out earnestly for God to relent.

God sees their repentance and chooses to not destroy their city.

Jonah, however, misses the memo.

Jonah gets angry and leaves the city and makes camp to watch and see if God will destroy his enemies anyway. God appoints a tree, a worm and a hot breeze to teach Jonah another lesson: his mercy.

In this story, God works through Jonah’s mistakes and has a purpose for him – even when Jonah is inside of a fish. The consequences of Jonah’s direct disobedience lead him to a place of conviction and obedience – until God doesn’t do what Jonah wants him to do.

Jonah proves to be stubborn, cowardly and rebellious – a prophet of God.

While the Assyrians, a war-like people group who the Israelites despise, reveal a conviction that brings them to repentance, which leads them to life.

No matter who you are and where you come from, God shows mercy and desires a repentant heart. He proves to be faithful, powerful and the God of second chances.

God appointed five things to guide Jonah on his path, but in the end we are left to wonder if Jonah continued to be angry and miserable the rest of his life or if he chose to accept God’s mercy – for everyone. He told God, “I fled toward Tarshish because I knew that you are a gracious and compassionate God, slow to anger and abounding in faithful love and one who relents from sending disaster… And now, it is better for me to die than to live.” (Jonah 4:2-3)

  Have you learned from consequences in your life?

  Have you hit rock bottom where God is waiting on you to repent?

  Have you received a call by God but heading in the opposite direction?

  Do you know the ultimate consequence of living a sinful life? (Romans 3:23)

Are you angry at God’s purpose for your life or at God himself?

No matter where you are today, God is listening, and he cares about you and desires for all to come to a place of repentance.

Listen to what he is trying to teach you today.