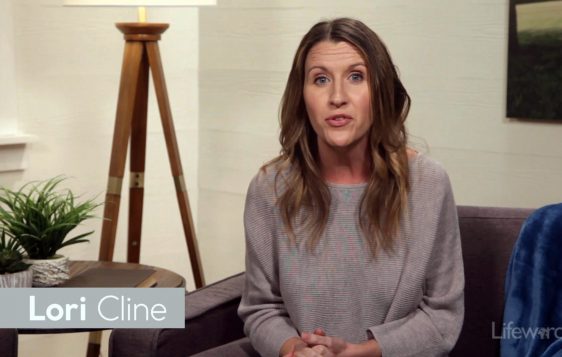 “My faith roots are a result of the BMA and ministries like Lifeword, so the idea of partnering with an organization that values ministry through media is a no brainer. Speaking from the heart and connecting to other hearts the love and truths of God is my mission and I know it’s the mission of Lifeword, so I’m excited to be a part of that.

Born in Bossier City, Louisiana, Lori Carroll grew up in an atmosphere of ministry. Her father Phillip Carroll was a pastor, so they were always around people, always talking, always building relationships. In fact, she says, while her peers were terrified of giving presentations, Lori couldn’t wait for her turn to speak in front of the class.

When she was thirteen and her family was hit by divorce, Lori and her brother found community and divine direction at First Baptist Church in Springhill, Louisiana, because of a loving youth pastor, Donny Parrish. It was there that Jesus met Lori in a very real way and started her on an intentional path of seeking God’s will for her heart and life.

During high school, her ministry calling and skill set began to formulate. The results of a personality profile test revealed “disc jockey” as her ideal occupation, and, based on her love of communicating, it made sense to her. After graduation from Springhill High School, she began attending Central Baptist College as a mass communications major.

In her freshman year at CBC, Lori met a music major named Drew Cline. The two were married in June of 1994 then moved to Fayetteville, Arkansas, where Drew was serving as music and youth pastor. Two years later, they moved to Houston when Drew joined a singing group called The Sound. Lori’s experience working in college radio and at Heaven 107.7, a Little-Rock based Christian music affiliate station, gave her the experience necessary for her first full-time job in radio at KSBJ in Houston.

For five years she worked full time in programming and promotions and on air as the evening host of Open Line with Lori Cline at KSBJ. In 2001 God called them to Nashville, Tennessee, where Drew had attended Belmont University and made music industry connections. He became worship pastor at a church in Franklin, and Lori entered the world of record label and Christian Contemporary Music (CCM) artist marketing and promotions with Word Records.

She was hired at Word to manage the national promotions department but later led the team as director. Her four years of experience connecting artists to radio at Word gave her the confidence and contacts to begin her own promotions company, Brighter Promotions, in 2005. For the next three years, she worked with talented artists and radio teams working records to radio and Drew became lead singer of NewSong, touring with them for two years.

In 2007 Drew and Lori welcomed daughter Daisy, and her professional career was put on hold for the next four years, a “mommy hiatus,” as she calls it; Jovie joined the family in 2010. The following year Lori began working for Christian Music Broadcasters as communications and member services manager serving radio leaders and industry professionals through conferences, community connection and engagement tools. During that time, Drew served as creative arts pastor at Journey Church then planted ROOTS Church in Frankin.

Eleven years in Music City came to an end in 2012 when Drew was called to Fellowship Bible Church in Little Rock to be their creative catalyst and worship pastor. Three years later, Lori left CMB to focus on family for a season then returned to work in Christian radio and ministry fundraising at ShareMedia Services. As engagement and communications strategist, she helped broadcasters expand their ministries to reach people for Jesus.

In October of 2016, after nine months of prayer and God leading, Drew left Fellowship to pastor Temple Baptist Church with a fresh vision and mission for that community as South City Church. Lori serves alongside Drew and loves her primary focus of serving her family and mission of South City.

Coming full circle, Lori is excited to step into a new season of ministry partnering with Lifeword. On April 3rd, her twice-a-week Lifeword Facebook broadcast will debut at 10 a.m. Lori says, “Donny’s call confirmed what God was already doing in my heart. I’ve felt a stirring to develop content but haven’t been sure about the right outlet and timing. This opportunity gives me the chance to share my heart and the truth of God’s Word in an everyday-life, relatable way that I love – just sitting down and talking.”

For Lori Cline, a lifelong relationship, a lifetime passion for people and a life of service and ministry have come together for God’s good purpose at Lifeword.