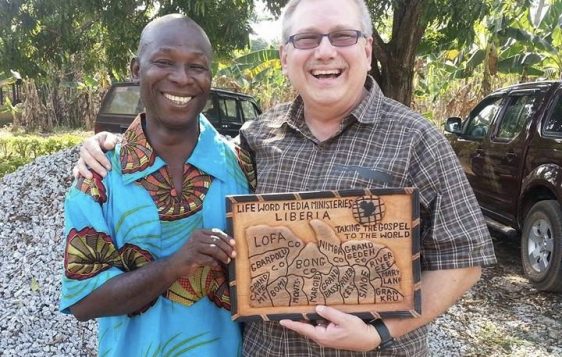 It was in a Fort Scott, Kansas, radio station that Rick Russell first caught the “radio bug.” When an uncle returned from the army and began working as a radio announcer, Rick’s visit to the station sealed his fate for life: He was completely fascinated with all aspects of radio, and his life was marked by listening to, learning about and dreaming of radio.

“I was amazed at the power of radio and how far away the signals came from. My dream,” he said, “was to be a radio personality at one of the big stations.” It was many years later that God would reveal more about that dream.

In the years that followed, his family moved to Georgia where Rick met a kindred spirit in sixth grade named Danny who had already built a radio station. They collaborated on the project, and Rick became Danny’s programmer, which gave him the experience for his first radio job at WNGA in Nashville, Georgia. From that point he worked in radio through high school and into his young married life.

Rick and his wife Angela served in volunteer youth ministry together while Rick continued in radio and sold life insurance. During this time, they attended their first BMA church at Meadowside in Pittsburg, Kansas, and became youth leaders there. It was at Meadowside where Rick met the man who would become a life-long mentor: Bro. Paul Mooney.

At the 1983 BMA national meeting in Biloxi, Mississippi, Angela and Rick went as messengers and heard about the BMA’s radio ministry, Harvest Gleaner Hour, for the first time. Rick says, “I remember Bro. Paul telling me that I would enjoy this next report at 3:00, so don’t miss it. There was a slideshow and voiceover with music; Bro. Paul was right.”

When Bro. Mooney accepted a pastorate in Laurel, Mississippi, he asked Rick to join him as music and youth pastor, his first paid ministry position. It was in Laurel that passion and ministry collided when he noticed that secular rock music was negatively affecting the young people in his group. When Rick introduced them to Christian contemporary music, their attitudes changed along with their music styles. Later he bought airtime on a radio station so they could participate in gospel media ministry.

Four years later, Rick began his association with Bro. George Reddin at a Big Creek Association meeting in Laurel when he volunteered to be area coordinator for the Walk of Faith. Two years later in 1989, Bro. George asked him to be Lifeword’s programming director when there were six broadcast languages.

After two months at Lifeword, Rick recalls that God gave him a clear picture of his life in ministry. Rick says, “My dream had always been to be a big radio personality on a big station.” But while trying to find a signal on an old, donated radio, Rick suddenly heard his own voice through its crackles. Rick said of that moment, “I’m not making this up. The first thing I heard was my own voice introducing the Lifeword program on WWL in New Orleans, and God spoke loud and clear: ‘I have already given you the desire of your heart; it just doesn’t look the same as you thought it would.’”

In the years since God allowed Rick to understand his purpose, he has witnessed many changes. Lifeword has evolved technologically, increased the language count and added new formats, social media being the most recent.

One of the most significant changes, he says, occurred when Dr. John David Smith became the Executive Director of Missions and led the new missions philosophy of a self-sustainable, self-visioning foreign missions model. Rick says this philosophy has moved Lifeword “toward a model similar to what Dany and I did in the sixth grade – using low-power broadcasting equipment to speak to kids our age. Lifeword Community Radio (LCR) is all over the world reaching anyone within the sound of a tiny village radio station, in their heart language and with programs of interest to them. A LCR (Lifeword Community Radio) broadcaster is not someone who has learned to speak Ewe, but someone who was born speaking the Ewe language.”

Although he has worn several hats in his 28 years at Lifeword, Rick is the Director of Broadcast Equipping and Training. His job includes training visionary leaders, broadcasters, programmers and station managers all over the world to create quality programming. Lifeword’s new initiative, the Lifeword Cloud, will benefit from his training when that programming is uploaded to the Cloud, added to the Lifeword Network and becomes accessible 24/7 to anyone, anywhere who speaks that language.

“Lifeword team members have always prayed for that kind of accessibility, and now we can see God’s hand pulling everything together. I have never been more excited for our future.”