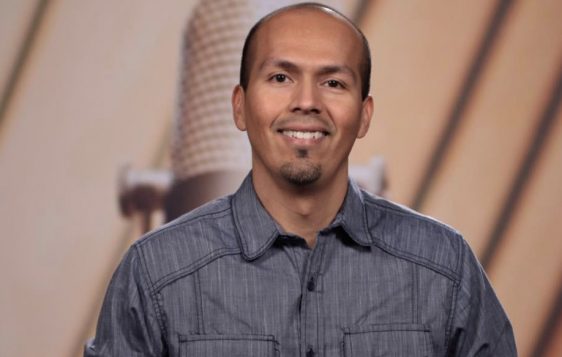 “Going north” meant success and a better life to Luis Ortega, Sr. and the other men in his village of La Estancia. So he left his wife and four young boys behind in Michoacán, Mexico, to go north to Houston, Texas, for the promise of higher wages. When they hadn’t heard from him in a while, Esther Ortega decided to take her sons to Houston and find her husband. Luis Ortega, Jr. was six years old at the time.

Before they left for the States, Luis recalls that his father was no different than the others he knew who drank and were abusive and unfaithful. No matter how many candles they lit or idols they implored, nothing changed until Luis, Sr. was invited to Centro de Vida/Center of Life church in Houston, jointly pastored by the late Paul Robinson, Ricky Robinson and, later, Bob Allcorn.

Luis, Sr. had no interest in going to church, but agreed to go to a small home meeting with the intention of poking fun at the believers gathered. But God had other plans for the Ortega family, and it wasn’t long before God convicted him and he was saved.

Luis’s mother, however, was not as easily convinced; she was suspicious of his new-found faith, and her Catholic and animistic rituals made more sense than an intangible god. But God worked in her heart, and soon the whole family not only went to church but committed their lives to Christ.

Centro de Vida and her leaders loved, taught and discipled the Ortega family. Even with his limited education, Luis’s father read the Bible and taught it to his family. Later, Luis Ortega, Sr. became a church leader and now pastors Centro de Vida in Dallas.

At age twelve, Luis’s mentor took him to the place he worked: a radio station in Houston, Texas. After a short studio tour, the mentor left to do a quick errand and instructed Luis to “do something if I’m not back before the song is over.” The song stopped and Luis queued the next one, gave the station I.D., announced the weather, and started the song. Because the station manager heard a new voice on the air, she came into the studio and discovered a young boy at the controls. Luis was offered a volunteer position that day, and four years later it became full time.

Luis surrendered to the ministry as a teenager, and his interest in technology continued during high school. He began attending Central Baptist College in 1996 as a Bible and ministerial student and graduated in 2000. The next year he married CBC student Lisa Sutherland, and they have four children: Elyse, Elias, Elynn and Ellisen.

After graduation, Luis began full time at Lifeword and part time as youth and associate pastor at Bald Knob Baptist Church in Plumerville, Arkansas. The pastor, Bro. Rufus Crawford, became a mentor to Luis but understood when Luis shared his burden to minister to Hispanics in central Arkansas. So after leaving Bald Knob in 2009, he and Lisa began a mission under the umbrella of Antioch Baptist Church in Conway called Camino de Vida, where he still pastors.

In seventeen plus years at Lifeword, he has managed the Spanish broadcast and technology for BMA America. He is now Lifeword’s Director of Operations, where his skills are critical as Lifeword implements the Cloud, which will allow anyone with internet access to hear the gospel.

Luis recently earned a masters degree with a leadership emphasis from Liberty University; however, through discipleship and his own natural bent, servant leadership is a skill he has had for a long time.