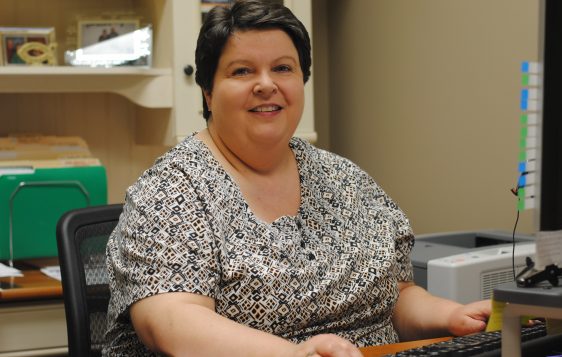 Ellen Rhinehart didn’t know she was considered the best typist at Southeastern Baptist College until Doug Siler arrived at the Laurel, Mississippi campus in 1982. As a new student, priority one was finding someone to type his term papers, so he consulted his peers, who all agreed he should talk to Ellen. Talking soon turned into dating, and by Christmas break Doug decided to return home to Bradford, Arkansas, to work and save money so they could marry after Ellen’s graduation.

Before her college days, Vicksburg, Mississippi, was Ellen’s home. The family had moved there from Collinston, Louisiana, where her father, Collins Rhinehart, worked at the International Paper mill in Bastrop. When he was offered a transfer to the new Vicksburg plant, the family, which included Ellen’s mother Barbara and her older sister Virginia, made the move to Vicksburg.

After a while the Rhineharts were invited to a new mission church by Mrs. Louise Crawley and Mrs. Geraldine Holloway, who were wives of paper mill employees. A mission begun by Oakland Baptist Church in Vicksburg, it was called Berachah, and it was the first BMA church they had attended. Their life revolved around the church, and Ellen was involved in GMA, part of a girls trio, and participated in Youth in the Harvest. God was already arranging decades-long relationships in her life and developing her love for small churches and thepeople in them.

In addition to serving at Berachah with the Crawleys, the Rhineharts got to know a young preacher named George Reddin, who pastored there for a short time. God moved her heart to salvation at sixteen and revealed another passion: business and clerical work. She took all the business classes Warren Central High School had to offer and held part-time clerical jobs during high school and college.

When Doug and Ellen first married in June of 1983, they lived in Bradford for a year, then in Vicksburg for ten years where she worked at Mercy Hospital in accounts payable and purchasing, then at a doctor’s office as medical transcriptionist.

A Frito-Lay route driver for many years, Doug was transferred to Arkansas, and they settled in a town on his route. Ellen commuted for a while then they moved to Conway, where she worked for a lawyer then at Central Baptist College. She loved working at CBC and intended to retire from there until Steve Crawley called in 2008 and asked if he could talk to her about Lifeword. At the time, Steve was financial director and he and Bro. George, whom she had both known since childhood, asked if they could talk to her.

She began at Lifeword in 2008 helping Steve with donor entry then later with accounts payable, payroll, and accounting. In 2010, Lifeword’s donor software changed, and she was stretched professionally as she learned a new system, but, she recalls, Steve patiently encouraged her.

Her favorite part of the job is working with donors, because she gets to correspond with contributors and read their personal notes to the Lifeword team. She feels very connected to them and their needs when they write personal notes with prayer requests or explanations about why they can’t give as much as they’d like.

Ellen says, “Many times, people send in donations in memory of someone who has died. It’s such a blessing to help them carry out the wishes of their loved ones. I have such a burden for our churches as I hear from them and note their support. Sometimes I just stop right there in my office and pray for individuals and churches, that God will continue to bless them.”