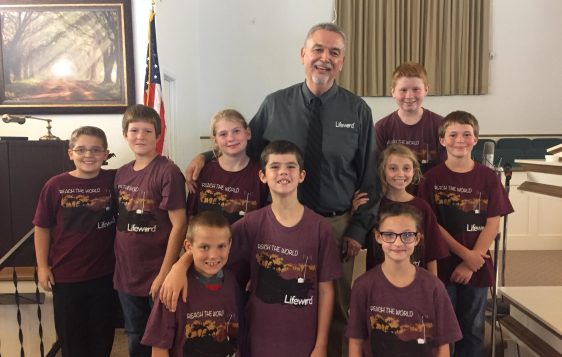 With 40 years of ministry to the churches and departments of the BMA, Donny Parrish considers her people his family and support system. Beginning at Harding Street Baptist Church in Baker, Louisiana, where he, his younger brother and his parents attended, he has loved and served that exended family. Donny recalls his mother, now deceased, as being the “original Wal-Mart greeter” who was hired by a local grocery story in Baker just to talk to everyone who came in. It’s easy to see where Donny gets his passion for people

After high school, Donny attended Louisiana State University for a year, then Jacksonville College in Texas for another year. He met “the prettiest girl on campus,” Datha Ruggles, at Jacksonville and the two married in 1974. Their first place to serve was First Baptist Church at Springhill, Louisiana, where Donny was youth pastor and worship leader. Their daughter Brittany was born in 1981, followed by Samantha seven years later.

While at Springhill, he and other student pastors invited youth groups to Teen Bible Conference and Donny and Datha sang and led music for the meetings. National Youth Department Director Bobby Tucker could see the potential of gathering teenagers in one place for worship, Bible study and fellowship. He shared his dream with Donny, and together they launched SOAR Conference in 1991, where music, drama, video and other creative arts are used to teach and inspire students to ministry. It is the largest conference hosted by the BMA.

In 1988, Donny left Springhill to serve as worship leader and youth pastor at Temple Baptist Church in Little Rock, and his relationship with Lifeword began two years later when Executive Director George Reddin asked him to help create the video ministry. Four years later Donny became worship pastor at Antioch in Conway, Arkansas, and in November of that year, his family endured the most profoundly difficult time of their lives: Eleven-year-old Brittany died of oxygen deprivation after aspirating a balloon at Lifeword’s offices.

Three weeks later, Donny returned to Antioch to lead worship, and the choir, accompanists and congregation shared their grief and tears with him, Datha and Samantha. Donny recalls that, “the whole association grieved with us. It was a heartbreaking time for a lot of people.” Twenty-six years later that support continues.

The tragedy has dramatically changed his ministry and given him an understanding of grief and loss that he wouldn’t have known otherwise. He has shared Brittany’s testimony and his own countless times and continues to help strangers who contact him about their own losses.

While at Lifeword and serving at churches, Donny led the conference division of DiscipleGuide for over 25 years and the student missions division of BMA Missions for ten years. Also, after leaving Lifeword in 1999 to serve as executive pastor at Fellowship in Forney, Texas, for twelve years, he continued to provide creative content and serve as radio personality for the ministry.

Donny returned to Lifeword in 2012, at the urging of Executive Director Steve Crawley, to be Chief Creative Officer of BMA America. He served as production team leader for all media, conferences, and development. In September of 2016 he was reassigned to the Lifeword team full time to focus on broadcast outreach to the United States. Since his return to Conway, he has helped Central Baptist College as spiritual life director, a position that includes planning chapel services for the students he continues to have a heart for.

Donny is currently Lifeword’s Executive Director, a position that he is humbled and honored to hold. His vision, the Lifeword Cloud, is an initiative that will reach anyone with Internet access, decentralize the ministry, and move it to creative and talented people around the world who will produce programming. Lifeword USA will be the hub for the Lifeword network of churches and producers all over the globe.

His passion for people and their salvation continues.