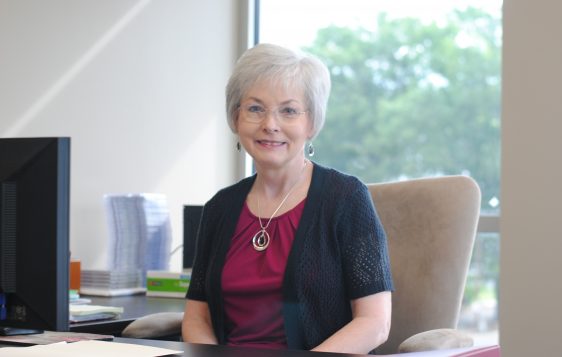 One of the clearest memories of Carol’s Oklahoma childhood was her father’s salvation when she was five years old. It was a defining moment for the Wood family and changed their lives forever. From that point on, Carol, her parents and her two sisters went to church every time the doors of Summers Baptist Church were open.

After high school, Carol left Westville, Oklahoma, to attend Central Baptist College where she received her associate degree. She met her husband Ken Gipson there, and they started a life of ministry that began at their first pastorate in Springdale, Arkansas, at Spring Creek Baptist Church.

It was in 1992 that George Reddin and Travis Plumlee asked Carol to come to Lifeword as assistant to Bro. Travis, who worked at Rapha, a Christian counseling center. Bro. George shared his vision about the newly established caller helpline and asked Carol to help coordinate volunteers. The goal was to have Lifeword broadcast listener support available 24/7. Carol recalls carrying the bag phone for after-hours calls and receiving one during a Wednesday night worship service then leaving as quickly as possible to answer it.

After her time with the helpline, she transferred to database manager and front desk receptionist. Then, beginning in 1996, she worked in the Production Department with Mike Jones and Mark Malone. During the next eighteen years, media formats went from reels to cassettes to DAT tapes to mini discs then CDs. Much of her work was managing shipping schedules for the six languages produced in the Conway office then shipping the programs to both foreign and domestic radio stations.

Carol feels blessed to have been a part of special projects that involve creating and distributing CDs and tapes around the world. One of those projects was the translation of Dr. E. Harold Henderson’s sermons into the Ukrainian language from reels onto cassettes and DAT tapes then sending them to radio stations for airing in Ukraine. Carol said, “When I heard through Bro. Jeff Franks that many Ukrainian people were being saved, I wondered how many of them had been saved by listening to Dr. Henderson’s sermons. I was thankful that I had had a small part in getting the gospel to them.”

In twenty-six years years at Lifeword, she has witnessed other developments including a change in format after the death of Dr. Henderson when English broadcasts went from fifteen-minute broadcasts to one-minute vignettes. Produced by Donny Parrish and Rick Russell, those short broadcasts altered how programming was created.

Lifeword has always adapted to advancements in technology, Carol says, but the biggest blessing of it is the streamlining of ministry and communication. “Now with the creation of the Cloud technology and a Lifeword network, people around the world will be able to hear the gospel in their heart language. We will no longer be limited to a few languages and a limited number of stations. Today we are in forty languages with unlimited potential for reaching those who have never heard.”

Since 2014, Carol says, there has been another blessing. “The integration with Missions and DiscipleGuide has allowed a much smoother workflow. Having them in the same building as Lifeword is just like adding another person to our family.”

As far as family goes, being mother and grandmother is Carol’s favorite role. Lori McMillan, husband Tommy and their children Cade, Leah, Will and Erin live close by. Ken and Carol enjoy being with them every chance they have. Their son Lance recently moved to Texas to be part of a church plant in Georgetown.

“The Lifeword team has truly been a blessing to me throughout the years. I have grown spiritually because of their examples and leadership qualities. It’s so good to be able to have devotional times where we share burdens and blessings.”