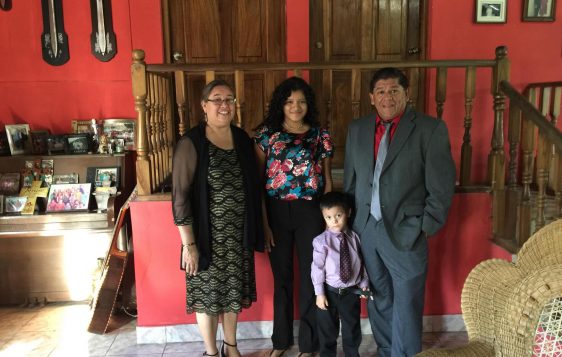 During Fidel Castro’s fifty-seven-year regime, restrictions were imposed on religious activity, and not much has changed in the eighteen months since his death. Communist rule in Cuba continues to marginalize Christians, but there is a growing presence of Protestants and an unknown number of house churches, possibly numbering in the thousands. It has been the same for 2,000 years: Persecution of the church causes Christianity to spread.

Among those house churches in Cuba are the ones BMA Missionary _____ has helped to establish and encourage. The fact that he is a citizen of Nicaragua, a country with Communist sympathies, has helped him to travel there freely to distribute Bibles and materials, and train leaders. Four years ago, he and his wife _____ felt a burden for Cuba and began visiting regularly to make contact with Christians there.

One of those contacts is Bro. Jesús, who was an atheist most of his life. He shared with Bro. _____ that he grew up believing Christianity was a business, since the priest asked for money in exchange for pardoning sins. But when he heard Lifeword’s Spanish program El Contacto Cristiano (Christian Contact), he began taking notes to compare and contrast Christianity with other belief systems. After years of study, he surrendered his life to Christ.

Media censorship, which includes the airwaves, is alive and well in Cuba, but Cubans like Bro. Jesús can often hear strong signals from high-powered stations in Central America that broadcast El Contacto Christiano. Because of the Lifeword Cloud, Spanish broadcasting can also be heard on the Internet, which is only available at pricey cafes and hotspots and sometimes only using dial-up connectivity. The Cloud will allow increasing Cuban Internet users, especially young people, to search a key word like “Jesus” and find gospel programming in Spanish.

At present, government restrictions include the following: Religious leaders must register with the government, new church buildings are not issued building permits, and public religious gatherings are not allowed. Punishments for these and other violations include harassment, fines, arrest, and imprisonment. Christian leaders are reluctant to say anything that could be construed as opposing the government in fear of repercussions.

When the church is persecuted the gospel spreads, and such is the case in Cuba. Please pray for this couple’s upcoming trip to “the island” this month to conduct more training. As with all of our leaders around the world, follow them on Facebook so you’ll know their immediate prayer needs.

Please join the Lifeword team as we pray for the following:

Please join the Lifeword team as we praise the Lord for the following: