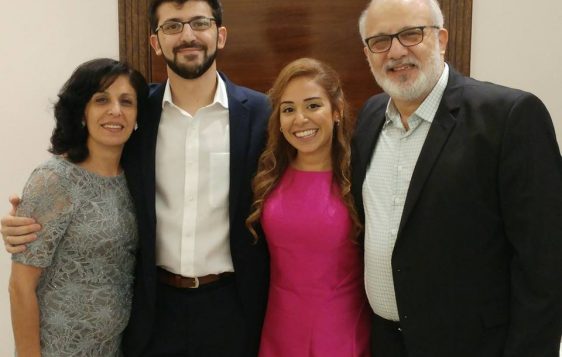 Only five languages have been chosen by Lifeword as “starter languages” included in the beta-testing stage before the public rollout of the new lifeword.org in August…and one of those is Arabic. To determine the best languages to use, Lifeword personnel considered the following about existing broadcasts:

* Are they produced only by indigenous people?

*Do they use various media outlets, such as online radio, internet broadcasting, and community radio?

After English and Spanish, the third broadcast begun by Lifeword (then called Harvest Gleaner Hour) was Arabic. The broadcast speaker for the Arabic-language Hour of the Harvest was Joseph (Yusef) Costa, then a missionary from First Baptist Church in Blackwood, New Jersey, to the Arab community in Philadelphia.

That early broadcast, former Executive Director George Reddin said, “was different from the Arabic programs of that day, because of Bro. Costa’s very polished delivery. Few people could handle the Word as well as Bro. Costa to begin with, and I doubt that there was anyone in the entire Arabic broadcast world at that time who delivered the gospel message as effectively as he did.”

His weekly broadcast was called From the Harvest of Bygone Days, andit is still heard regularly in the Middle East and in high Arab population centers in the northeastern USA, Canada and Australia.” When Yusef Costa died in 1989, his son Charles Costa took over the Hour of the Harvest microphone and continues his father’s work to this day.

In 2000, realizing that the Arabic world now had more than forty hours per week of quality gospel programming aimed at Arab believers, Lifeword shortened its broadcast from a fifteen-minute Bible teaching format to a more contemporary one-minute dialog format aimed at Arabia’s lost population of about 200 million.

During the Gulf War, the new short format allowed Charles Costa to quickly prepare special messages to the Iraqi people. “We were able to assure them that the war was not an action aimed at the Iraqi people, but was designed to help topple the cruel regime that had held them in fear and bondage for decades.”

By late 2009, the BMA’s Arabic ministry in the Middle East had expanded and strengthened to the point that its media ministry could be sustained entirely by BMA churches there, allowing Lifeword to re-allocate much needed funds for broadcasts to unreached people groups. Missions Director Dr. John David Smith said, “That decision by Lifeword follows a fundamental principle in today’s missions philosophy: When indigenous ministries are capable of standing on their own, we remove our ‘temporary scaffolding’ and let them take complete charge of reaching their own culture with the gospel.” By doing this, indigenous ministries can become more effective, and U.S. funds can be redirected to new fields.

Bro. Charlie said, “Creative new Arabic media ministries on the internet are proving the wisdom of this approach. Financial necessity made us work to invent less expensive and more effective methods of reaching out to our own people here in the Middle East, and our people take a great deal of pride in ‘owning’ those new media ministries.”

Now the third generation of Costas is involved in the Lifeword Cloud. Joe Costa, grandson of Yusef Costa, has produced a series of videos and is overseeing the transcribing and metatagging of his father Yusef’s sermons. Both formats will be loaded onto the Cloud, continuing the media ministry legacy begun by Bro. Joe’s grandfather almost 40 years ago.