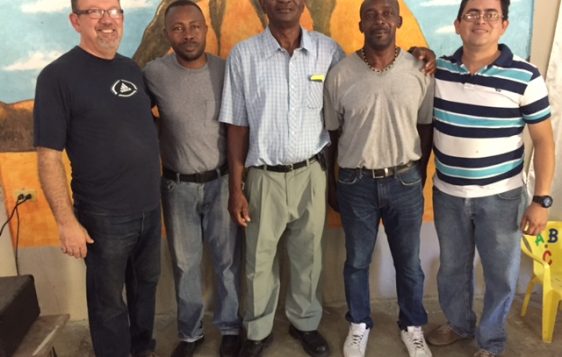 Delayed by several months due to political unrest and customs issues, the Making Everlasting Smiles shoeboxes were finally handed out to Honduran schoolchildren March 11-14. As part of the team, I had the honor of meeting many of our Lifeword personnel, bringing them gifts and understanding how they serve the Honduran people.

BMA Missionary and Lifeword coordinator Denis López was our guide and translator for the week, and he brought his fourteen-year-old daughter Susana to help. Missionary Brad 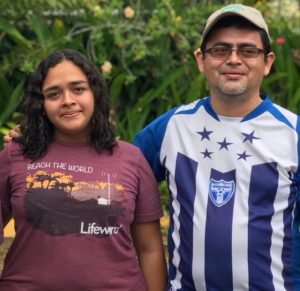 Gathright also served as guide and translator and gave us invaluable information about the culture and the people that he, Bro. Denis and other church leaders work with in some capacity every day.

The Sunday after we arrived, we attended Iglesia Bautista Nazareth in San Juan, the largest BMA church in the area, which broadcasts its Sunday evening church services on their Lifeword Community Radio (LCR) station. Nazareth has Bible study in the morning and worship service in the late afternoon, and we had attended their morning Bible study the day before, where I met two of their three pastors. Pastor Cruz Morales and Pastor Cherry both knew Lifeword Director of Operations Luis Ortega. I videotaped messages from them to Luis, thanking him and encouraging him in his work, just as he has done for them on his visits.

As the team gathered for breakfast the first day of passing out shoeboxes, I completed one of my tasks for Lifeword: delivering a computer to Bro. Ricardo Herrera Ramirez, a Garifuna leader whocoordinates broadcast efforts and Lifeword Community Radio (LCR) initiatives among the Garifuna. Bro. Luis Gonzalez, another Garifuna leader and broadcaster, was the eventual recipient of the computer. Both men have been instrumental in LCR efforts in Honduras and other areas.

On the next shoebox day, Bro. Ricardo, who traveled with the team to each school, surprised me with a very special gift: a beautiful conch shell retrieved from the ocean by divers just the 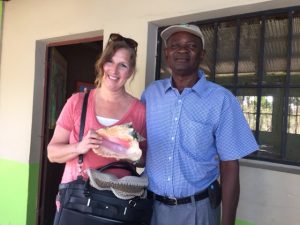 day before. I had given him gifts in addition to the computer, so I suppose he wanted to do the same. It was a priceless one, so I repeated the word “Gracias” to hopefully express my gratitude. Through Susana’s translating, he explained that he had been in ministry since 1992 thanks to the preaching of Bro. David Dickson, who was instrumental in creating a Garifuna alphabet and Bible in his native tongue. Since then, he said, he has been passionate about sharing the gospel with his people.

As the shoeboxes were passed out each day, Bro. Ricardo and Pastor Raul invited the children to attend a new mission church in Pastor Raul’s home. Bro. Brad Gathright explained that the shoeboxes are instrumental in growing new churches because when the children begin attending services, their mothers will often come with them. Gradually, he said, the men begin to come as well, and a church is born.

Another way to get the word out about a new church is through LCR stations, so Bro. Denis trained Bro. Raul and his son, Raul, Jr. in LCR set-up, programming and maintenance. The local broadcasts they produce will help them as they invite people to the new mission, broadcast sermons and provide follow-up Bible teaching.  Observing firsthand how Missions and Lifeword work together was an invaluable experience.

That experience and learning about Denis López, Lifeword’s coordinator in Honduras, were high points of the trip. On each of the shoebox days, Bro. Denis played his guitar and taught the children lively, fun songs with big motions. His playful, goofy side came out at those, and other, moments, but we also had a chance to talk seriously about his ministry which began twenty years ago when he was called away from secular work in the banking industry. Technology skills he had acquired in banking were important when he began representing Lifeword in coordinating and training potential broadcasters to produce effective media. In fact, two days before our arrival, he had been in Guatemala at the Bible school for LCR training with eight young men. Again in May, he will travel to Nicaragua to conduct more media and broadcast training.

It’s hard to tell the full story of Lifeword representatives around the world without watching them interact with their peers and serve their people. Observing Bro. Denis and the men he works with was an education in servant leadership, discipleship, partnership and, yes, even friendship. They are united in kingdom work and their mission is clear: Anywhere God leads, we’ll go.