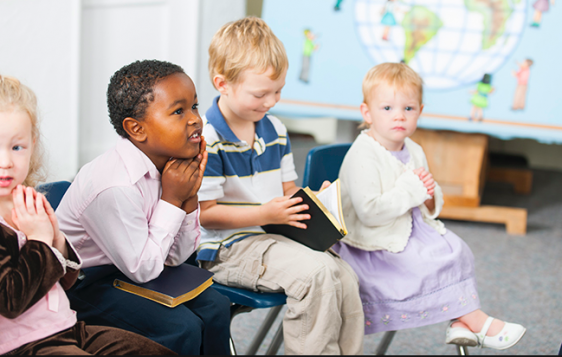 All it took was an invitation.

An invitation to go to the church around the corner.

My family had just moved to a new neighborhood, and a new friend two doors down invited us to attend worship services at their church. It was a simple question: “Why don’t you come to church with us sometime?”

But it was the first step onto a path that led me to abundant life in Christ.

I was very young, maybe three, so I have no recollection of attending those first few years, but my earliest memories of church do not include my parents. Then, as the years went by, I became the little girl who was dropped off there.

I’m not sure what kept me attending without the rest of my family, but I’m pretty sure God had something to do with it! His “children”, the ones who called him “Savior” and attended that church, were simply being obedient.

They understood their mission, their purpose in his kingdom work: Surrendering to God’s will means loving others enough to care about their eternity.

Jesus said on numerous occasions that those who followed him should love ALL people. But they weren’t just words for others to obey. During his short time on earth, he preferred the company of people who were neglected by society: the poor, the sick, the outcast, the sinners, and the children.

So the years went by and those church members obeyed Jesus’ call to love people and be Jesus to the little girl who came to church on her own.

At the age of eight I followed my best friend down the aisle to salvation. Not the best way to take such a step, but God filled me with his presence that Sunday morning when I shook my pastor’s hand and told him I wanted what I saw in the people at my church around the corner.

From there on, I walked to church on my own. All I had to do was cut across some backyards onto a street that led me straight to the church’s front doors. (That was during the days when children could walk alone without fear!)

When my family moved away from that neighborhood, my mom was happy to drop me off and pick me up, sometimes with my little brother in tow. I had friends, I had a Sunday school class, I had teachers and mentors…I was part of a faith family well before I knew what that term meant.

Looking back on those years, I realize now that precious, faithful people loved, protected and prayed for me, the little girl who was there every time the doors were open…but not with her parents.

Oh, I had a great family and my parents taught me by word and example the important precepts of life: hard work, dependability, kindness, generosity and respect. But church just wasn’t their thing.

Going to church without my parents didn’t matter to me. I wasn’t embarrassed…until I became a teenager.

Sometime during those years, I realized that almost everyone else had their parents with them. At that age, you don’t want to be different; you’re aware of what is “normal” and you want to be that.

Occasionally, my youth pastor asked those of us who were older to give their testimonies. It seemed like everyone’s began with the same words: “Well, I grew up in a Christian family, blah, blah, blah…”

I desperately wanted to be able to say those words, but I couldn’t. Either way, it didn’t affect the way people loved me, supported me, gave me rides and taught me about Jesus and the Bible.

Who was orchestrating my life so all these things would fall into place? Jesus

And he hatched that plan millennia ago. Long before the world was formed, those plans were in place. The street I would live on, the neighbors who would also live there, where that church would be built, everything.

What’s even more amazing is that he planned the lives of those influential, prayerful, obedient church members who loved me.

So in the end, that testimony I thought I didn’t have was actually my story! I DID grow up in a Christian family; it just wasn’t my biological family.

They were my church family! My “faith family.” It just took me decades to figure it out.

Don’t overlook the unfamiliar faces you see coming through the doors of your church.

But even more important, don’t miss the opportunity to say those words, “Why don’t you come to church with us sometime?”