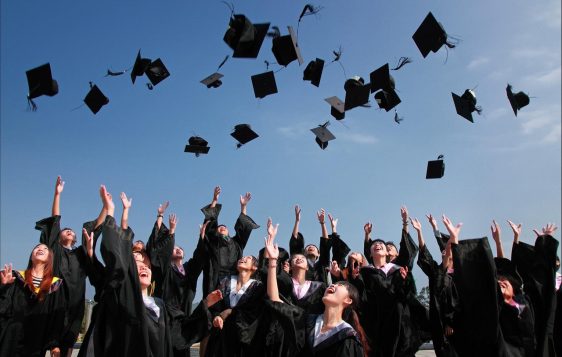 Eighteen years…Eighteen years and two months to be exact. That should have been plenty of time to prepare for what people reminded us would come quickly and swiftly.

And they were right.

In the beginning, however, life didn’t seem to be going that quickly.

We were blessed with three tiny babies at the same time: two girls, one boy. The hospital made us leave a few days after they were born, but we were surprised, because we had no idea what we were doing!

Regardless of our reservations about raising them, the adventure began…

People warned us not to wish it all away. Savor every moment, they said. Write down their cute little phrases, they said. You won’t remember it, they said.

And they were right.

We didn’t listen, and time didn’t slow down. Suddenly, it was high school graduation, and they were going off to three different colleges, three very different experiences, and, eventually, three separate lives.

As I write this, it’s the month of May, graduation season, and I see beautiful, young, excited faces of children and the smiling, reflective, proud faces of their parents.

They made it. There were some times graduation might have looked a little iffy to those parent, but they made it. They deserved to smile and capture the moment.

Those parents will spend one very short summer to prepare them for whatever they will do next. For some, it will be college and jobs, for others, it will be technical schools and apprenticeships.

The first real step into life for children.

The first real step into an empty nest for parents.

For my husband and me, the rug was yanked out with a mighty, sudden jerk. In three days’ time we moved them into three different dorm rooms, hugged three precious necks, cried three different sets of tears, and left three anxious children to make it on their own.

Except for summer breaks and a few semesters here and there, they would never live in our home again.

Did we prepare them well during those eighteen years?

Did we teach them that loving the Lord and surrendering their lives to him would make everything else fall into place?

Did we model the character, habits and behaviors that would point others to Christ?

After the yanking of the rug came the many regrets. I know, I know, that happens to everyone, but as Christians, we know better. The Bible is the Great Instructional Manual for Life, and “How to Raise Your Children” is the theme of many of its chapters.

One of those chapters is Proverbs 22 and verse 22 says to “direct your children onto the right path, and when they are older, they will not leave it.”

Leaving that path is what scares us when we have to let them go.

The true test was college graduation and truly being out on their own. For our children, that meant two marriages and one move far away from us right out of college.

Now they were really gone, but we prayed that we did more things right than wrong.

They all love the Lord and are involved in churches, so do I even dare reflect on the things I might have done right? I’m way more qualified to give the top things I should have done, but here goes, and may you be encouraged:

#1 Not only was church attendance a requirement, they didn’t get to “decide for themselves” whether they wanted to go to church or youth group once they were mobile.

#2 Jobs were mandatory to having a vehicle when they turned sixteen. Other parents told us they didn’t want their kids to work because it interfered with school work and sports, but we had a hunch that jobs would do more for them than either of those things.

#3 We took the time to get to know their friends and offered our home as a hangout spot. There will be no regrets that you invested in your children’s friends.

#4 They all went on mission trips to third world countries, which broadened their worldviews and helped them to see how privileged they were.

#5 We never encouraged or spent money on trendy things: clothes, gadgets, music, the latest and greatest technology, the must-have electronic device. Instead, we bought plane tickets, made memories and showed them that their world was only a tiny dot on the map.

#1 We were way too anxious about sports. Even though we enjoyed watching them compete, we didn’t always have the right perspective and would love to have do-overs in that area.

#2 Although we talked a lot about church, the Bible, God, and our beliefs, we didn’t have formal family devotionals and we should have been way more intentional about praying together.

#3 Our kids could have benefited from volunteering as a family. Their school set aside a mandatory outreach day for volunteering in their city, but we should have done more together.

#4-6 We should have relaxed more, laughed more, listened more, given more hugs and encouragement, had more family dinners, and worried less.

Graduations are exciting and the transition to being empty nest-ers can be a shock, but they’ll always come back home. With three gone all at once, it was a huge yanking of the rug for my husband and me, but knowing that God has planned all our tomorrows gives peace and joy in the moments when we just miss our children’s precious faces.