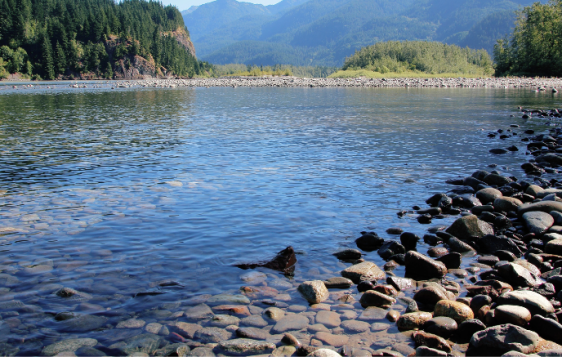 “You cannot swim for new horizons until you have lost sight of the shore.” – William Faulkner

In the book of Exodus, courage is displayed softly, yet boldly, in a mother’s effort to save her son. Jochebed was a Levite woman, a Hebrew, and with child. When the baby was born and she saw it was a boy, fear swept through her.

The Pharaoh of Egypt had commanded for every baby boy to be killed at birth or thrown into the Nile if found. For a few months, she was able to hide him. But, when she could hide him no longer, she had to make a choice.

The choice was not whether or not to kill him. Instead, it was to keep him or let him go.

Could she release her child from the protection of her arms and rely on God to provide a way?

Could she surrender it all to the Lord and allow Him to have control over the fate of her child?

She courageously made a choice.

“But when she could hide him no longer, she got a papyrus basket for him and coated it with tar and pitch. Then she placed the child in it and put it among the reeds along the bank of the Nile.” (Exodus 2:3)

Tears falling, she waded in the river, as she held her child for what she thought would be the last time. She lay him in the basket, and with every ounce of courage she had, she pushed him into the reeds by the bank of the river.

And the Lord provided.

“His sister stood at a distance to see what would happen to him. Then Pharaoh’s daughter went down to the Nile to bathe, and her attendants were walking along the riverbank. She saw the basket among the reeds and sent her female slave to get it. She opened it and saw the baby. He was crying, and she felt sorry for him. ‘This is one of the Hebrew babies,’ she said. Then his sister asked Pharaoh’s daughter, ‘Shall I go and get one of the Hebrew women to nurse the baby for you?’
‘Yes, go,’ she answered. So the girl went and got the baby’s mother. Pharaoh’s daughter said to her, ‘Take this baby and nurse him for me, and I will pay you.’ So the woman took the baby and nursed him.” (Exodus 2:4-9)

This is such a beautiful story because the mother had great courage let go and let God provide.

The baby could have been taken down river.

He could have been eaten by a wild animal.

He could have been found by the Pharaoh or his men and killed.

But she trusted in God.

And there, behind the reeds, was his sister. In the right place at the right time. She knew immediately what she should say to the Pharaoh’s daughter as she pulled him from the river.

It took an extreme amount of courage for that mother to trust in God to make a way and provide for her son. God blessed her for her faith.

Today, there’s something we each need to let go of. For many years, it was my pride.

I was so prideful I didn’t even realize it.

I earned what I had.

Then one day, I saw myself for who I truly was. And I fell before the very throne of God and surrendered. I had believed Jesus was the Son of God and that He could save me from an eternity in hell, but I hadn’t taken off my crown.

Give it to the Lord.

What Jesus has planned is far greater than you can create. But it takes courage.

Put it in the river and watch it sail away.

Trust that God will provide.