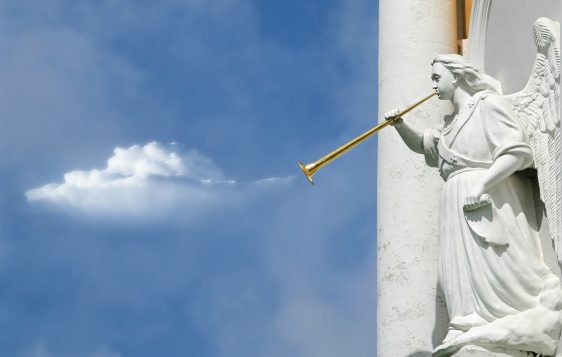 John Paton (1824—1907), missionary to the New Hebrides Islands in the South Pacific, was on one occasion surrounded by a tribe of warring cannibals who intended to burn his compound to the ground and kill Paton and his wife. Realizing they could not fight the cannibals, the Patons began to pray for God’s protection.

When the sun came up the next morning, the cannibals were gone. The Lord had delivered them from certain death.

About one year later, the chief of the cannibal tribe gave his heart to Christ. John Paton asked the chief why his men did not attack that night a year ago and kill him. The chief replied, “Because of the men who were with you.” John Paton said, “There were no men there—just my wife and I.”

The chief said, “No, there were hundreds of big men in shining cloths and carrying swords circling your camp.” When the warriors saw the guards, they were afraid and withdrew to preserve their own lives. Did God dispatch an army of angels to protect these two missionaries? God very well could have in the same manner that he did for Elisha (II Kings 6:15-17).

Holocaust survivor Corrie ten Boom (1892—1983) tells of an event that occurred during the Jeunesse Rebellion in the Republic of Congo, Africa in 1960. Rebels had advanced on a school where about 200 missionary children lived. “They planned to kill both children and teachers,” she said.

“In the school, they knew of the danger and therefore went to prayer. Their only protection was a fence and a couple of soldiers, while the enemy, who came closer and closer, amounted to several hundred.”

Incredibly, the rebels suddenly turned around and ran away! The exact same thing happened the next day and the day after that when the rebels tried to approach the school again.

As providence would have it, one of the rebels was wounded and brought to the missionary hospital. As the doctor was dressing his wounds, he asked the rebel, “Why did you not break into the school as you planned?” The rebel responded, “We could not do it. We saw hundreds of soldiers in white uniforms, and we became scared.”

Corrie later reflected that “In Africa, soldiers never wear white uniforms. So, it must have been angels. What a wonderful thing that the Lord can open the eyes of the enemy so that they see angels!”

Maybe the psalmist explained stories like these when he wrote: “The angel of the LORD encamps around those who fear him, and he delivers them” (Psalm 34:7) or “For he will command his angels concerning you to guard you in all your ways; they will lift you up in their hands, so that you will not strike your foot against a stone” (Psalm 91:11,12).

Child of God, the next time the spiritual enemy, Satan, attacks you, boldly claim God’s promises to deliver you.