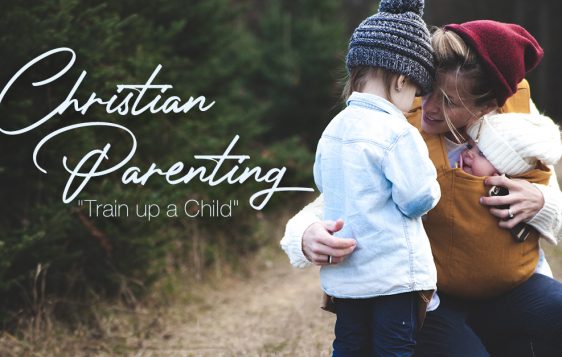 This is the second of a three-part parenting series. Part One is at https://lifeword.org/blog/christian-parenting-part-one-laying-the-foundation/

The goal of parenting is to build a strong Christian family. A “strong Christian family” is built upon a strong foundation—the Lord Jesus Christ and the Word of God. Therefore, let us examine the most well-known verse in the Bible on child training and begin to lay a biblical foundation for training our children: “Train up a child in the way he should go: and when he is old, he will not depart from it.” Proverbs 22:6). *

Now let us examine Proverbs 22:6 word by word to understand its full meaning.

Parents are to “Train up a child . . . ” The words “train up” are a translation of the Hebrew word hanak (haw-nak) and this Hebrew word is pregnant with meaning:

The Hebrew word hanak translated in the Old Testament as “dedicate” in every occurrence except our text (Deut. 20:5; I Kings 8:63; Neh. 7:10,11; 12:27). The reason we should dedicate our children to the Lord is stated by the psalmist: “Sons are a heritage from the LORD, children a reward from him . . . ” (Ps. 127:3). The Hebrew word translated as “heritage” means, “possession” or “property.” You may speak of “my child,” but every child really belongs to God.

Hannah was a godly woman who had no children so she asked God for a child. She promised God that if he gave her a child, she would give the child back to him. God honored Hannah’s prayers and gave her a son that she named Samuel:

The Hebrew word translated as “asked” in verses 20 and 27, “give” and “given” in verse 28, and the name “Samuel” in verse 20, all come from the same Hebrew root word. This passage is a Hebrew play on words, which literally means, “I asked this child of God, and God gave him to me, and now I give the child back to God.”

The King James Version translators captured the true essence of this Hebrew word in verse 28: “Therefore also I have lent him to the LORD; as long as he liveth he shall be lent to the LORD.”

When I speak of dedicating a child to the Lord, I am talking about a mother and father asking God for wisdom to understand how he has gifted this child, help in training the child properly, and then giving their child back to the Lord asking God to direct the child’s life.

Dedicating a child to the Lord has nothing to do with the child’s personal salvation or future vocation. These decisions a child will have to make for him or herself at a future date.

The Hebrew word hanak (translated as “train up” in Prov. 22:6) is translated as “initiation” or “introduction” in classical Hebrew. The idea is that parents are not to wait for a child to choose his own way in life but are to place a child on the right path in early childhood.

According to the Bible, it is a parent’s God-given responsibility to train his or her child. Moses addressed these words to parents:

And in the New Testament, the Apostle Paul told the parents in Ephesus:

“Fathers, do not exasperate [to rouse to anger or to irritate] your children; instead [to the contrary], bring them up [nurture them to maturity] in the training [the systematic training of children with an emphasis on discipline] and instruction [to instruct a child in the Lord’s commandments and warn them that sin does have consequences] of the Lord” [parents are responsible to teach their children about the Trinity, the word of God, a personal relationship with Christ, holy living, prayer, reading the scriptures, etc.].” (Eph. 6:4).

The Hebrew word hanak (translated as “train up” in Prov. 22:6) can also be translated into English as the “palette,” the “roof of the mouth,” or “the gums.”

After the birth of a baby, a Hebrew mid-wife would dip her finger in the juice of crushed dates and rub the juice on the child’s gums and the roof of the mouth. This would create the sensation for sucking.

The mid-wife would then give the baby to his or her mother and the baby would begin nursing. The point is that it is the responsibility of the parent to help the child develop a taste or thirst for spiritual things.

I have concluded that the book of Proverbs is really a course on parenting. Therefore, the truths that Solomon taught his son about God, life, relationships, finances, attitude, speech, morality, thoughts, wisdom, humility, etc. are the very same things we should be teaching our children today.

Why?  Because these are the very principles that we need to be embodying as adults.

A part of the training of our children includes the introduction of spiritual truth to our children.

The Hebrew word hanak (translated as “train up” in Prov. 22:6) also conveys the idea of “throttling” or “restricting” something that is about to get out of hand. There are evil tendencies in a child’s life that must be “restricted” by parents. The purpose of disciplining a child is so that the parent can exercise external control over a child’s behavior until the child develops his or her own internal controls.

The Hebrew word hanak (translated as “train up” in Prov. 22:6) in its verb form refers to bringing into submission a wild horse by placing a bit in his mouth. The purpose of the bit is to teach the horse that it is less painful for him to do what you want Him to do than it is to do what he wants to do. In a similar way, a parent must shape his or her child’s individual will to bring the child under subjection to authority.

A part of the training of our children includes the shaping of the will of a child.

The underlying principle of the Hebrew word hanak (translated as “train up” in Prov. 22:6) is that God gives parents the primary responsibility for the training of their children.

Parenting involves much more than giving a child a nice place to live, nice clothes to wear, plenty of food to eat, a weekly allowance, a good education, and taking them to church. If done correctly, parenting takes a lot of time and effort.

A mechanic in a Fram oil filter commercial used to say, “You can pay me now—or you can pay me later.” Parenting is like that. You can invest in your child now and enjoy them both now and later. Neglect them now and pay for it later. It is your choice. Children are worth every dollar and every minute you invest in them!

*Proverbs 22:6 exegesis adapted from Joe Temple and his book Know Your Child