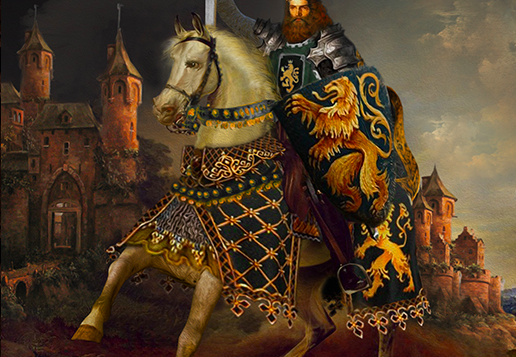 I’ve always loved watching and reading anything about medieval times. Kings and their royal families, strong and fearless knights storming into battle for their country, and the beautiful architecture of the castles and walls built as a fortress…

While many kings were terrible to the people of their kingdoms, there was one who was kind, loved and the people willingly referred to him as “my lord”: King Arthur.

We’ve heard the mythical, romanticized stories of Camelot and the Knights of the Round Table and how King Arthur came about. The stories emphasized his compassion for others, his desire to stand for what was right and his willingness to die for his people.

When people bowed and referred to him as “Lord”, they were saying that they were his faithful servants and followers. Whatever he might ask of them or command them, they would do without question. They surrendered all to him.

Did you know there is a king even greater than King Arthur? His compassion for his people was so great that he gave his life for them and promises to make them heirs to his kingdom! Unlike the legendary King Arthur, His kingdom is without end.

He is the LORD, Jesus Christ, the Son of God!

Since I was a child, I had heard about who Jesus was and that he promised to save us from our sins. I knew he was one with God and the Holy Spirit and that all three had created the heavens and the earth.

I knew the Bible was the Word of God, but that’s where it all stopped. I still lived my life the way I wanted, I defined my own “truth”, and I sought out my desires.

Even knowing all that, I was miserable, alone, scared, and desperately searching for something to fill this massive void in my life, but nothing could.

Why did I have that void? It was created in me so I would have a desire that only Jesus Christ could fill.

When I truly acknowledged that Jesus was not only my Savior (from my sins), but my LORD, full surrender took place. Whatever he asked of me, I would do without question.

Not out of fear, but out of devotion and thanks for what he had done for me!

I started attending church and joined my first Sunday school class. I began seeing and understanding things like never before! My appetite for his Word, the Bible, became insatiable. I constantly wanted to know more and more, and God’s desires became my own.

I signed up for college courses through our church and at each session, I would say to my friends, “I never knew that”, or “I’ve always been told differently”. I was finally seeing Jesus for who he truly is: He is my LORD!

Even when I was sinful and at my worst, he still loved me and was not willing to give up on me. He was like a majestic King riding into battle to save his daughter, the princess, who had been lured away by evil.

Jesus is my Lord, but did you know that one day every person will recognize this and bow before him?

Philippians 2:10-11 says, “That at the name of Jesus every knee should bow, of things in heaven, and things in earth, and things under the earth; And that every tongue should confess that Jesus Christ is LORD, to the glory of God the Father.”

I am not who I used to be; I have been redeemed. Jesus paid the price for the debt I owed. He didn’t take one look at me and decide I was worthless. He never took His eyes off me because to him, I was priceless. His love is never-ending!

The only regret I have is that I only wish I had realized it sooner. I wasted so much time that could have been spent worshiping my King and serving my LORD and sharing with others that they too are priceless in the eyes of our LORD Jesus Christ.

Do you know Him? Is He your LORD?