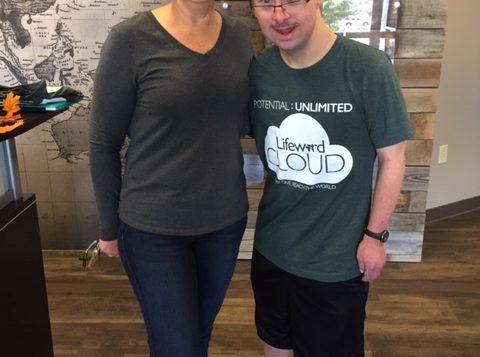 If you ever have the privilege of meeting Ben Roberson, you will never forget him. One of the first times I saw him, he was at a football game cheering on one of his favorite teams, the Conway Christian Eagles. When things didn’t look so good on the field, he decided to do something about the quiet, unmotivated fans: He walked up and down the bleachers yelling, “Come on everybody! Let’s go!” Of course, we all did what he told us to do and supported the team…he’s Ben. Nobody can say no to Ben.

Fortunately for us here at Lifeword, people still can’t say no to him. Ben learned about the media ministry he came to love when his family joined a BMA church (Antioch) in Conway, Arkansas, where he became friends with former Lifeword Executive Director Steve Crawley. His mom told him that Lifeword spreads the gospel through media, and when he heard about how he could raise money for media missionaries by walking, he asked if he could do that.

Nobody can say no to Ben, so, of course, she agreed. Having a missionary heart is in his DNA. His mother Kim lived on the mission field where her parents were IMB missionaries in Cali, Columbia. He knows about missionaries and what they do, so the question about raising money came as no surprise to his family. Every year since that first one, he has practiced, trained and gathered sponsors before the mid-October walk.

This year his mom announced on Facebook that Ben would be walking again. His goal? Ten miles. But they would do it differently because of his health concerns. Ben would walk one mile each day leading up to the Walk, then the last mile at the Central AR Area Walk on October 10th.

Contributions had already begun pouring in weeks before the event, and each time he asked his mom if he could hand deliver the checks and cash to our offices. Leading up to October 10th, we saw him quite a bit, and it was a blessing every time. With almost every visit, someone in the office asked to take a picture with him. His determination has humbled all of us on the Lifeword team, and he is a celebrity at the BMA Global Ministry Center

The night of the walk, his mom was out of town on a mission trip, but his dad and two of his adoring aunts walked with him for support. Ben came through the entrance gate that night with his entourage, sturdy walking shoes and new therapeutic socks someone had donated so he could walk more comfortably.

He did it. The training paid off.

Now, it’s our turn to “cheer from the stands” just like Ben does at football games when the fans are not doing their jobs. With funds still rolling in, his most recent count is $3300. He’s challenging all of us: “Come on, people! Let’s go reach the world for Christ!” If Ben can do it, so can you, and nobody can say no to Ben Roberson.

Lifeword Sunday 2018 is just a few days away.  How will you give sacrificially so people can hear the message of hope that can only be found in Jesus Christ?